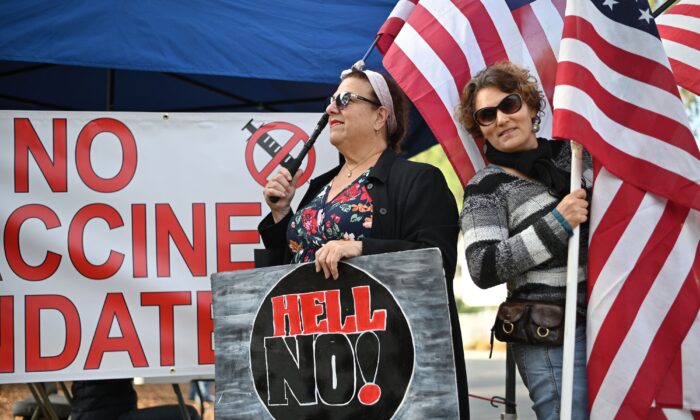 Workers at NASA's Jet Propulsion Laboratory (JPL) and their supporters protest outside JPL against a U.S. government mandate requiring all federal employees to receive the COVID-19 vaccine, in Pasadena, Calif., on Nov 1, 2021. (Robyn Beck/Getty Images)
Congress

Forty-two Republican senators say the Biden administration’s stalling in bringing the federal workforce back to its offices is creating massive delays in delivering much-needed government services to citizens in a timely manner.

In a letter to the administration’s three top personnel chiefs, the senators pointed to what they described as the “widespread lack of responsiveness and accessibility across the federal government on account of current agency work plans” that aren’t returning government workers to their official duty stations.

Unlike most other Americans, many of the 2.1 million federal civilian workers have continued working from home as a result of the CCP virus, also known as the novel coronavirus.

“Businesses have now reopened, children and teachers have returned to in-person learning, and health care and public safety workers continue to show up for work. Yet we continue to hear from constituents in our states about a lack of responsiveness from federal agencies,” the senators wrote.

“We understand the unique challenges that COVID-19 has presented, but Americans continue to face unprecedented delays in accessing their federal government. This is unacceptable,” they said. “It is now time to bring back our federal workers and deliver the service that the American people have been promised and expect of their government.”

The GSA is the government’s housekeeping agency, maintaining federal office buildings and related facilities, while OPM is the federal human resources department for the civilian workforce. The OMB is the White House office that functions as the central regulatory clearinghouse of the executive branch.

In addition to Sens. Roger Wicker of Mississippi, Marsha Blackburn of Tennessee, and Roger Marshall of Kansas, the signers include GOP senators:

In a Nov. 9 statement making the letter public, the senators pointed to four examples of delays resulting from the trickle of federal workers returning to their offices:

The senators wrote that “if agencies are pivoting to more permanent off-site work, there are a number of costs that must be considered. For example, field and operational office spaces have maintained their leases during the period that a regular in-person presence has lapsed and employees continue teleworking. This office space footprint is a drain on taxpayers who are ultimately paying the price for empty offices.”

Only one of the 20 federal agencies contacted by the senators was able to provide its plan for returning workers to their duty stations. All federal departments and agencies were supposed to submit such plans to OMB by July 19.

“Others have either cited ongoing negotiations with their unions or said they had no plan to share with our offices at this time. This lack of transparency is a disservice to the taxpayers that these agencies were created to support and protect,” the senators said.

President Joe Biden has given all federal workers a Dec. 8 deadline to be vaccinated against the virus or face termination.