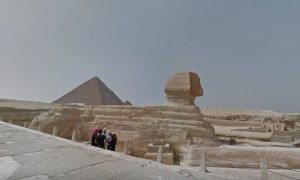 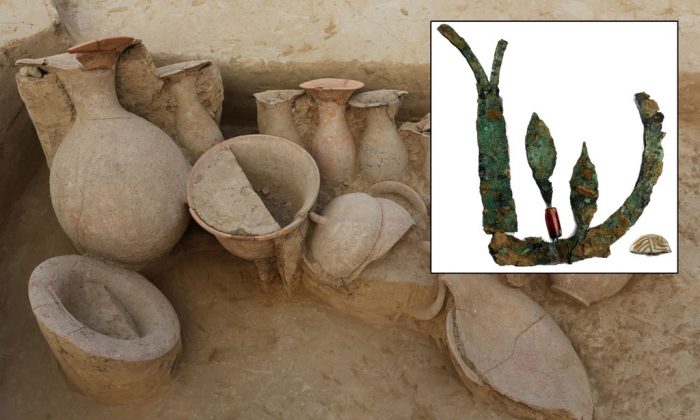 NEW DELHI —Indian archaeologists uncovered a 4,000-year-old copper crown in the village of Chandayan, in the northern Indian state of Uttar Pradesh this week, from what they believe was the late Indus Valley civilization.

According to Dr. Rakesh Tewari, the director general of the Archaeological Survey of India (ASI), this is only the second crown discovered at an Indus Valley site in either India or Pakistan. Earlier, a silver crown was found at another late Indus Valley site in what is now the Fatehabad district of Haryana state in northeast India.

“The person wearing the crown could be an important person of the society,” said Dr. A.K. Pandey, the director of the excavation at Chandayan and a superintending archaeologist at ASI.

“The person wearing the crown could be an important person of the society.”
— Dr. A.K. Pandey, superintending archaeologist, Archeological Survey of India

Tewari said it was too early to tell if it belonged to a ruler in the region.

“It is not known if in those days, people used it as a crown or just as a head gear,” he said.

The copper crown, decorated with a Carnelian and a Fiance bead [both precious stones], was found on a skull and exposed by laborers while they extracting clay to make bricks in August. Word of the discovery spread around India, and caught the attention of the ASI, which started excavating the site in early December.

“Our objective was to undertake a salvage operation, just to look into what could be found around the site of the skeletal remain,” Tewari said.

During excavation, Pandey also found animal bones and mud pots at the same excavation depth as the burial site, but about 65 feet away. This suggests that an animal was sacrificed during a funeral ceremony for the person whose remains were found.

“This was a practice in those days,” Pandey said.

According to Pandey, another piece of the same crown, a pelvic bone, and femur of the left leg of the person was unearthed along with 21 earthen pots.

One hundred and fifty feet away from the burial site, archaeologists also dug up a habitation site of the same period and found a compact floor, mud walls, and holes for fence posts.

According to Pandey, the discovery is important because this is the first time evidence of a late Indus Civilization habitation was found so far east.

The most mature period of the Indus Valley civilization, called the Harappan Civilization, extended from 2,600 B.C. to 1,900 B.C.

Located in Pakistan and northwest India, artifacts from the Indus Valley civilization have been uncovered over a span of 930 thousand square miles, bigger than the size of Western Europe. It was one of the four largest ancient civilizations of China, India, Egypt, and Mesopotamia, which now extends over Iraq and parts of Kuwait, Iran, Turkey, and Syria.

The writing system of the Indus Valley Civilization has not yet been deciphered and thus it is the least understood of the four ancient civilizations.