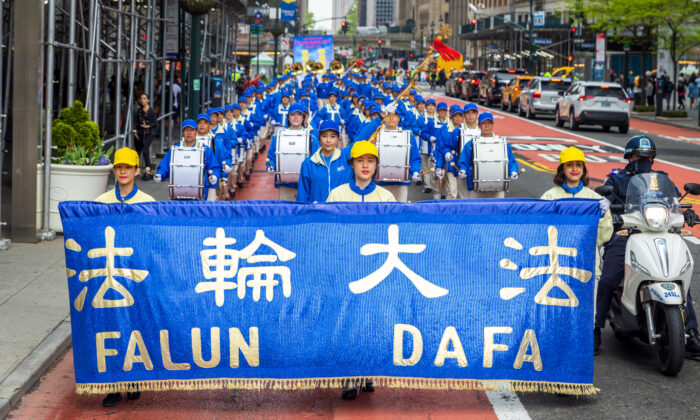 Falun Gong practitioners take part in a parade marking the 30th anniversary since its introduction to the public, in Manhattan, New York City, on May 13, 2022. (Mark Zou/The Epoch Times)
By Eva Fu

NEW YORK—Around this time every year, thousands from New York and around the world flood some of Manhattan’s busiest streets to celebrate a day they hold dear to their hearts. This year was no exception.

Although the pandemic has cut down travel, about 4,000 Falun Gong adherents from New York and elsewhere gathered on May 13 in the Big Apple to mark World Falun Dafa Day. Their bright yellow or blue shirts made them stand out as they marched from East 47th Street down to West 42nd Street. The date, May 13, also coincides with the birthday of the discipline’s founder, Li Hongzhi.

This year marks 30 years since Li introduced the practice in China in 1992. The meditation practice is rooted in traditional Chinese belief systems, teaching the values of truthfulness, compassion, and tolerance to inspire holistic mind and body improvement.

The discipline spread quickly via word of mouth across China. In seven years, about 70 million to 100 million people were practicing, making it one of the largest spiritual communities in China. But by 1999, the atheist Chinese Communist Party (CCP), deeming the practice’s popularity a threat to its grip on power, launched a brutal persecution targeting Falun Gong.

The expansive campaign, which continues today, has resulted in millions being sent to detention centers, labor camps, and prisons, where adherents are subjected to torture, slave labor, brainwashing, and forced organ harvesting.

This year, hundreds of officials from around the world have issued awards and proclamations recognizing the occasion, including nearly 300 from New York and New Jersey.

“For decades, Falun Gong practitioners have suffered at the hands of the CCP simply because of their religious beliefs,” Sen. Marco Rubio (R-Fla.) said in a tweet on May 13, observing the occasion.

He said he “stands with those who peacefully practice their faith & calls for an end to the persecution of Falun Gong & other religious groups.”

Looking Out for Others

Among the parade’s participants was 45-year-old Zhao Jing, who was arrested in October 1999 from her classroom at the prestigious Nankai University’s College of Foreign Languages in northern China’s Tianjin city. The student was expelled the same year when she refused to give up her faith.

Zhao later journeyed to Beijing to publicly appeal for religious liberty at Tiananmen Square. For this, she was detained and imprisoned, and suffered violent interrogations and torture while in custody.

But standing amid a crowd of brightly dressed women and sporting a green floral jacket at the parade, her face was beaming—seemingly unmarred by years of persecution.

The values espoused in Falun Gong’s teachings have given her the inner strength and wisdom to face whatever arises in her life, she said.

She first picked up a Falun Gong book while browsing in a bookstore in 1997. The teachings inspired Zhao to look out for others when encountering anything.

Not long after she started practicing, a car hit her while she was riding a motorcycle. As she fell to the ground, her first thought was that she hadn’t been careful enough and may have caused damage to the car. When the driver got out to ask if she was all right, the first words that came out of her mouth were: “I’m very sorry. Is your car OK?”

She wasn’t really hurt, and she just had a few scratches on her wrists, knees, and legs.

Sreedhar Meka, a 48-year-old IT programmer in New Jersey, first learned about Falun Gong in 2008 after receiving a flyer about the regime’s forced organ harvesting of detained adherents. He took the flyer home and stuck it on his wall. Then, out of curiosity, he checked out the practice’s website and started reading its main book, “Zhuan Falun.”

It took him a year to finish the book from cover to cover.

“I just forced myself to read it. I cannot explain. But I just liked it,” Meka told The Epoch Times.

He said he had read many books on spirituality but that none came close to what he understood in reading “Zhuan Falun.”

“It explained [everything] so easily in scientific terms, with common terms that a normal person like me can understand. It all made sense to me in the end,” he said.

He, like Zhao and many others, was appreciative of the practice’s core values for bringing clarity to his daily life. Key concepts that resonated with him were compassion and letting go of things.

Before, “if something didn’t go the way I expected it to go, I used to be so depressed, and that used to put stress on my health,” he said.

“Now I can just let it go with a smile.

“That’s something money can’t buy. Even if you go to the doctor every day, they can’t do that.”

Zhao has been applying the same principle, compassion, while working in customer service for an international hotel chain in New York.

“Many of the things that people get caught up with, when you look at it, you think: Is this even worth it?”

When frustrated customers shout at her, instead of taking it personally and feeling sorry for herself, she tries to empathize with them. By doing this, Zhao can understand why they’re acting that way and realize that often it isn’t related to anything Zhao has personally done.

Thinking of others has allowed Zhao to maintain an unaffected mind when handling difficult situations, which in turn helps to “melt down the vexation” experienced by customers, she said.

At the parade’s starting point in the Dag Hammarskjold Plaza next to the UN headquarters, Wattana Bo, a New York postal service worker and painter, was quietly photographing the paradegoers. He said he was looking for inspiration for his next painting.

Bo has been a Falun Gong adherent since 1998 and was wearing a white hoodie emblazoned with the Chinese characters for the practice’s three tenets, truthfulness, compassion, and forbearance—or zhen, shan, and ren.

“If you are going to really do something, pursue something, and really have something good to start with, with zhen, shan, ren—you can’t go wrong with that,” he said.

“It really covers almost everything.”