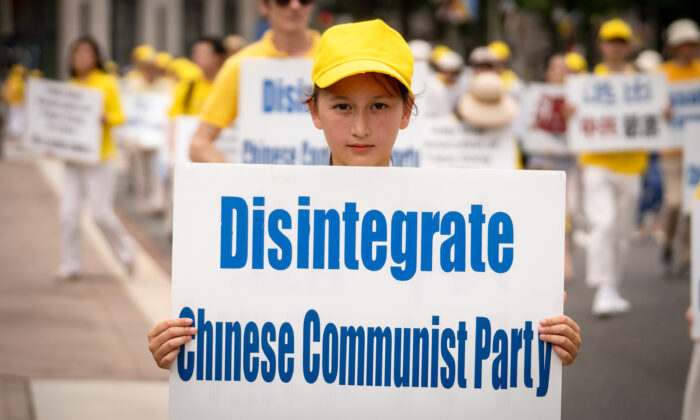 Falun Gong practitioners march down Pennsylvania Avenue to commemorate the 23rd anniversary of the Chinese Communist Party's persecution of the spiritual practice in China, in Washington on July 21, 2022. (Samira Bouaou/The Epoch Times)
By Eva Fu

NEW YORK—Chinese entrepreneur Chen Quanhong had one message he wanted to tell the world: “Tuidang.”

It’s a Chinese phrase that means “quit the Party.”

The words were emblazoned on a yellow flag Chen held up at a parade in Washington on July 21 to draw attention to the Chinese communist regime’s myriad human rights abuses.

Chen is now one of 400 million Chinese people who have renounced their ties to the Chinese Communist Party (CCP) and its affiliate organizations.

In June, the business owner from China’s eastern Shandong Province made a statement formally breaking his ties with the Party, participating in a nearly two-decades-long grassroots movement that has sought to expose the communist regime’s history of deceit and killing, and to give people an opportunity to disassociate from it.

“In China, I was no different from a worm trampled upon by the authoritarian power, not daring to stir a bit,” Chen told The Epoch Times. “Only when I came to America did I begin to feel like a person, because finally there’s no fear from the Communist Party.”

The Washington parade was the first Chen had joined in his 50-plus years of life. It came ahead of a major milestone for the Tuidang movement: 400 million people have now renounced their CCP affiliations. The number surpassed that mark on Aug. 3.

“Four hundred million—this number is greater than some countries’ entire population,” Yi Rong, president of the Global Tuidang Center in Queens, New York, told The Epoch Times. “With such a large group abandoning the CCP and steering clear from its crimes, it will spur a positive change in Chinese society.”

As more people join the quest for freedom, a “new China” free of communist control appears ever closer to reality, she added.

The Party’s history of killing during its rule over China has left generations of families broken and scarred, including Chen’s own.

Chen’s mother was about 21 years old when she lost her mother during the Great Famine, a manmade disaster from 1959 to 1961 resulting from then-CCP leader Mao Zedong’s industrial policies that saw tens of millions die of starvation.

Driven by hunger, Chen’s grandmother and his mother’s 17-year-old sister took about half a sack of mung bean pods from the land the regime had collectivized. After their deed was discovered, the authorities publicly denounced the two and beat them. Chen’s grandmother, who was blindfolded and surrounded by a group of thugs who punched and slapped her, died about 10 days later.

Dark memories like these, either retold by Chen’s mother in bits and pieces over the years or gleaned through reading into history, helped the businessman see the nature of the Party despite its repeated claim of being the “savior of the people,” he said.

The Tuidang movement began in 2004, spurred by the release of the “Nine Commentaries on the Communist Party,” a book first published by the Chinese language edition of The Epoch Times detailing the brutality and deception perpetrated under the totalitarian regime.

Since then, millions of copies of the book have made their way into China. Many who helped distribute these copies were adherents of Falun Gong, a spiritual discipline the regime has sought to wipe out with a campaign of arrest, torture, and vilification for the past 23 years and counting.

Falun Gong is a meditation practice consisting of a set of moral beliefs centered around the principles of truthfulness, compassion, and tolerance. The practice became a political target after the Chinese regime deemed its huge popularity—with up to 100 million practicing by 1999—a threat to its authoritarian grip on power.

As a restaurant owner in Shandong, Chen once received informational materials about Falun Gong from two adherents who dined at his establishment, who were, he said, “incredibly peaceful and kind.”

Their persistence despite the relentless state suppression awed him then, and again in Queens in July, when he came across a Falun Gong information booth encouraging people to withdraw from the Party and its affiliates.

“I just thought: ‘What kind of people would arrest those who pursue truthfulness, compassion, and tolerance? Definitely not good people,’” he said.

At the Global Tuidang Center, a volunteer gifted Chen a copy of the “Nine Commentaries.” He read it three times and knew he no longer wanted to be affiliated with the Party.

Breaking From the Party’s Control

The CCP maintains three organizations for different age groups: the Young Pioneers, for children aged 14 and younger; the Communist Youth League, for those between 14 and 28 years old; and Party membership.

While the latter two aren’t mandatory, Party membership is still considered a necessary credential for anyone aspiring for a career in government or state-owned enterprises. As of 2021, China had about 110.4 million Young Pioneers, 73.7 million Youth League members, and 96.7 million Party members, according to state data. This adds up to a total of 280.8 million—one-fifth of the total Chinese population.

The 400 million figure, representing people who have withdrawn their Party affiliations, covers anyone who was once part of the Party or its affiliated entities, including those who’ve been automatically unenrolled as they’ve grown older. Many from mainland China or who have relations there also choose to use a pseudonym for fear of the regime’s retaliation.

In joining each of the Party affiliates, the individual must make a vow to devote their life to the Party. Such a promise essentially binds the person to the regime even if age automatically unenrolls them from the youth groups, Yi said.

To rescind the oath requires a formal statement, she said.

“Because you gave your life to the Party, you are no longer a free person. You can’t control your own life,” Yi said. “For this reason, the Communist Party has the free rein to slaughter Chinese people, brainwash, deceive, and persecute them as they please.”

At the moment, the Global Tuidang Center each day receives about 50,000 requests from people to quit the Party, according to the center’s estimates.

In Taiwan, there are about 3,000 volunteers supporting the Tuidang movement. Each month, about 20,000 mainland Chinese agree to renounce their Party affiliations after talking with the volunteers over the phone or in person, according to one coordinator, Bai Dexiong.

Bai recounted a recent case of a man from Shandong who sought out one of the Tuidang centers for assistance. The man looked somewhere between 20 and 30 years old. He described himself as a former nationalist who would be stirred at the slightest criticism of the CCP.

His attitude changed, however, when he tested positive for COVID-19 and authorities sealed the door of his apartment and locked him inside, barring him from basic activities such as buying food. He lost his job during the quarantine period. He spent his new free time on the internet, and by using a virtual private network to bypass the CCP’s digital censorship, he read voraciously about the regime’s past. He became ashamed of his former ignorance, he told the volunteer, according to Bai.

The regime has only itself to blame for the Tuidang movement’s growing appeal, Yi said, citing Beijing’s draconian lockdown policies as the latest demonstration of its disregard for human life.

Globally, the sentiment appears to be tilting against the regime as well. A petition organized by the Global Tuidang Center calling for support to “end the CCP” has collected more than 2.5 million signatures.

‘Down With the Communist Party’

The movement is also having an impact inside mainland China.

Zeng Hanxiao, a 26-year-old from Sichuan Province in southwestern China, suffered four months of detention after voicing support for a dissident on the Party’s wanted list.

He asked to quit the Young Pioneers in April after learning about Tuidang.

“Tuidang is a kind of rebirth and redemption,” Zeng told The Epoch Times at the time about his decision, adding that his soul was now “clean.”

Shortly after, Zeng was detained again for shouting slogans such as “Down With the Communist Party” in front of the U.S. Consulate General in Guangzhou. He was released on bail on July 28 after receiving beatings from police and prolonged solitary confinement.

After his release, Zeng said he was encouraged to learn about Tuidang’s continued momentum.

“It shows how many people are standing with me against the CCP,” he said.

Zhong Yuan and Gu Xiaohua contributed to this report.