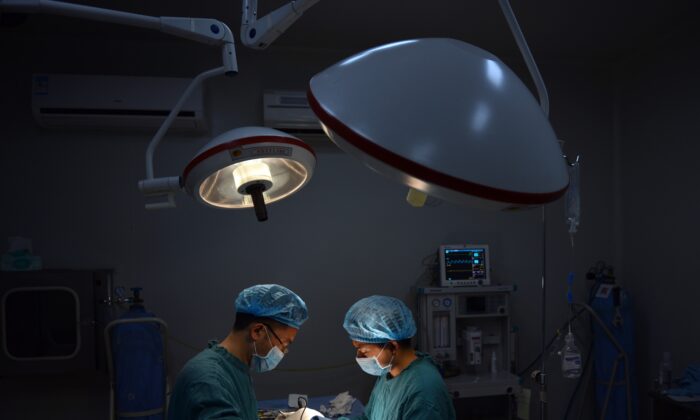 A plastic surgeon performs a "special" nose operation on a patient at his clinic in the southwest Chinese city of Chongqing. (Peter Parks/AFP via Getty Images)
By Eva Fu

Chinese doctors had four hearts on hand for Sun Lingling, a 24-year-old Chinese national who for nine months was on life support.

The 24-year-old fell ill in Japan with a rare autoimmune disease that led to irreversible heart damage. In mid-June, her medical team flew her to China’s Wuhan Union Hospital on a chartered flight. Four heart matches came in the course of 10 days. After a grueling seven-hour surgery, she recovered to the point where she was able to eat on her own.

Accounts of Sun’s survival, and an image of her smiling and posing with a victory hand sign on her hospital bed, appeared on the front pages of major Chinese newspapers with dramatic headlines, such as “A life or death race.” The Chinese embassy in Japan called the surgery “legendary” and touted it as a show of China-Japan friendship and cooperation.

But with China’s voluntary organ donation system still in its nascent stage, experts questioned how the hospital was able to source Sun’s matching organs so quickly—a concern at the core of allegations that the regime is engaged in the grisly practice of forced organ harvesting: killing prisoners of conscience to sell their organs for profit.

Sun’s first matching heart came on June 16 from Wuhan, but doctors, upon assessing the coronary artery, found the health condition not up to par and gave it up. After finding a second heart from nearby Hunan Province three days later, Sun developed a high fever which again delayed the surgery. On June 25, she received another two offers: one from a female in Wuhan, and a second from a male in the southern city of Guangzhou. They chose the latter because it has “better heart functions,” the Chinese media report said.

“The question is: who is the source for these 4 hearts,” said Dr. Torsten Trey, executive director of the medical ethics advocacy group Doctors Against Forced Organ Harvesting. In the United States, patients generally waited for around 6.9 months for a matching heart donation, according to the latest government data from 2018. At this rate, to get four matching hearts for the same person—meaning four people who donated their organs after they died at the ICU or in fatal accidents—may take around two years, he noted.

In 2020, more than 156 million U.S. adults—or roughly half of the U.S. populace—have given donation consent. China, though the most populous country in the world, has only a fraction of the population doing so, owing to deeply-rooted cultural beliefs of keeping one’s body intact upon death.

What happened to Sun “is possible, though quite unusual, even within any well-functioning voluntary organ donation system,” said Jacob Lavee, a professor of surgery and heart transplantation department director at the Tel Aviv University in Israel. But within the context of China, he said, “such a cluster of organ donors within a few days raises high suspicions as to the nature of these donors.”

It “rather follows an ‘on demand system,’” said Trey, calling Sun’s case “beyond explanation.”

China’s organ transplant system has been scrutinized in recent years, with a London-based independent people’s tribunal concluding in June 2019 “beyond reasonable doubt” that the Chinese regime was targeting prisoners of conscience for their organs. The main source of organs were practitioners of Falun Gong, a meditative discipline for improving mind and body that has been severely persecuted by the Chinese regime for the past two decades.

In a 160-page report released this March, the tribunal found “no evidence of the practice having been stopped” and said that the lack of international oversight has allowed “many people to die horribly and unnecessarily.”

As the virus ravaged China in the first half of the year, China’s organ transplant industry was business as usual, with no “obvious organ waiting time delays,” according to an investigation by the U.S. nonprofit, World Organization to Investigate the Persecution of Falun Gong. One nurse in the Guangxi region told the investigators that, despite fears of infection, they would “do the surgery whenever there is one,” only that they “won’t go crazy like during the pre-pandemic times.”

Since late February, China has performed at least six double-lung transplants on COVID-19 patients, at least two of which took place in Wuhan, where the ongoing virus pandemic first emerged and a hotspot of China’s transplant industry. Chinese hospitals gave little information about how the organs were sourced.

Ethan Gutmann, a China analyst who authored the book “The Slaughter” about China’s illicit organ trade, said Sun’s case exemplified the problems with the country’s transplant industry. “Very little about the ‘Japan patient’ is all that new,” said.

He noted that similar to Sun’s case, the success of the double-lung transplants was prominently featured on Chinese media in both Chinese and English. “The message was obvious: We have the organs. It’s safe. Come on over. China is open for business,” he told The Epoch Times in an email. “Bloody Harvest,” another book that investigates allegations of forced organ harvesting in China, cited a Taiwanese organ tourist who was provided with eight kidneys during his two separate trips to Shanghai over the course of eight months—until the final one was accepted by his body.

Such practices are indicative of a transplant industry that “has a large pool, or stable, of political and religious prisoners that are already tissue-typed for transplant,” Gutmann said.

China only established its voluntary donor system in 2015, promising to only source organs from it. But researchers have disputed such claims by pointing to the inconsistency of China’s records.

A November 2019 study published in BMC Medical Ethics found that China’s organ donation data conformed “almost precisely to a mathematical formula,” concluding that authorities likely falsified the data. Another, published in February in the medical journal BMJ, identified 440 out of 445 Chinese medical papers that failed to clarify whether individuals had given consent to donate their body parts.

During a recent undercover investigation by WOIPFG, a military doctor also admitted they were sourcing “high quality” organs from young living persons and even offered investigators a chance to see the organ source if they wish to.

“As long as you have the nerves,” Li Guowei, a kidney transplant surgeon from the Fourth Military Medical University in Shaanxi Province, said in an undercover phone call in January. “I can take you to the bed to let you have a look … you will see that the person is in their 20s.”

A WOIPFG investigator then asked in a separate interview: “You are using Falun Gong [practitioners’] organs, but you can’t openly say so, and can only say these are in good quality and disease-free?”

The “short, unprecedented wait times” of the recent Chinese organ transplant surgeries, such as the double lung transplants and the Japanese patient, should raise eyebrows among the international community, which “has a responsibility to reject unethical medical practices,” said Trey.

“If China does not allow independent, unannounced inspections, the international transplant community should decouple from the Chinese transplant system,” he added.