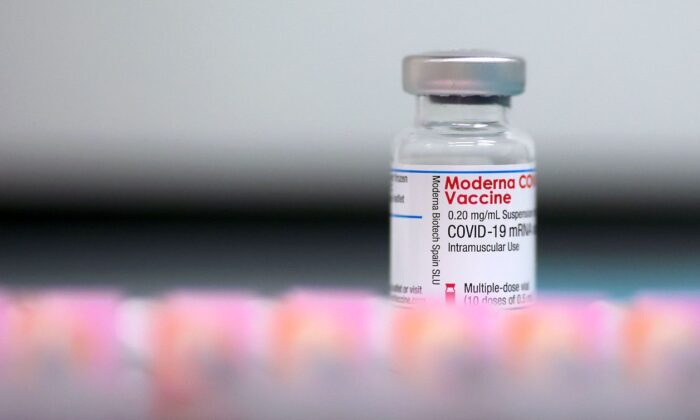 A vial with the Moderna CCP virus vaccine is displayed at the corona vaccination center at the university hospital in Magdeburg, eastern Germany, on Jan. 22, 2021. (Ronny Hartmann/AFP via Getty Images)
By Samuel Allegri

A 39-year-old healthy single mother from Utah died four days after taking a second dose of the Moderna COVID-19 vaccine on Feb. 1.

According to local news channel KUTV, her family said that Kassidi Kurill, who was a surgical technician for plastic surgeons, “had more energy” than most people around her and was a happy person with no known health problems.

“She was seemingly healthy as a horse,” Hawley told Fox News. “She had no known underlying conditions.”

Hawley said that Kurill started to have symptoms after receiving the shot, experiencing soreness at the shot location, then beginning to feel ill and complaining that she couldn’t urinate despite drinking plenty of fluids. She improved slightly the next day, but then her condition worsened; she said she had headaches, felt nauseated, and still couldn’t urinate.

On the morning of Feb. 4, Hawley woke up to his daughter’s plea for help.

“[She] said her heart was racing and she felt like she needed to get to the emergency room,” he told KUTV.

He took her to the emergency room, where she got blood tests. Hawley said she became less coherent and began to throw up.

In the evening, they transported her to a trauma center.

“They did a blood test and immediately came back and said she was very, very sick, and her liver wasn’t functioning,” Hawley said.

The doctors attempted to stabilize her for a transplant, but her condition worsened to the point where she could no longer talk by the morning of the next day.

“They were trying to get her to a point where she was stable enough for a liver transplant. And they just could not get her stable,” he said. “She got worse and worse throughout the day. And at nine o’clock, she passed.”

Kurill’s family is still waiting for an autopsy to determine the cause of death.

They set up a GoFundMe page titled “Kassidi Kurill and Emilia Memorial Fund,” in her and her 9-year-old daughter’s honor.

KUTV led an investigation into COVID-19 vaccine side effects and found four deaths were reported by families and caregivers.

The Centers for Disease Control and Prevention (CDC) told The Epoch Times in an email that as of March 8, more than 92 million doses of mRNA vaccines for COVID-19 had been administered, with 1,637 deaths occurring following the injections.

The CDC states on its website, “To date, VAERS has not detected patterns in cause of death that would indicate a safety problem with COVID-19 vaccines.”

The Vaccine Adverse Event Reporting System (VAERS) was put in place in 1990 to capture unforeseen reactions from vaccines.

Moderna didn’t respond to a request for comment by press time.