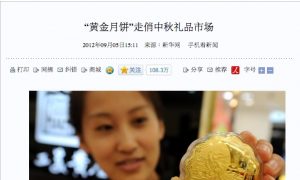 On Jan. 7, 2013, the sewage waste flooded into the Zhuozhang River in the Huangniuti County of Shanxi Province.(Sohu.com/Screenshot/Epoch Times.)
China

Dangerous and Dirty Water in China: Examples From the First Half of 2013

In China, pollution has been discovered in all of its water bodies, with serious pollution occurring in the watersheds of the Yangtze, Pearl, Yellow, Huai, Hai, Liao, and Songua Rivers.

One third of the Yellow River’s native fish have become extinct.

Half of China’s people are forced to drink water contaminated with human waste and industrial chemicals.

Scientific reports have shown that liver cancer and birth defect rates are four to eight times greater in areas where water is heavily polluted. Death rates from stomach and liver cancer in China are the highest on the planet.

This photo gallery shows examples of water pollution in China during the first half of 2013.