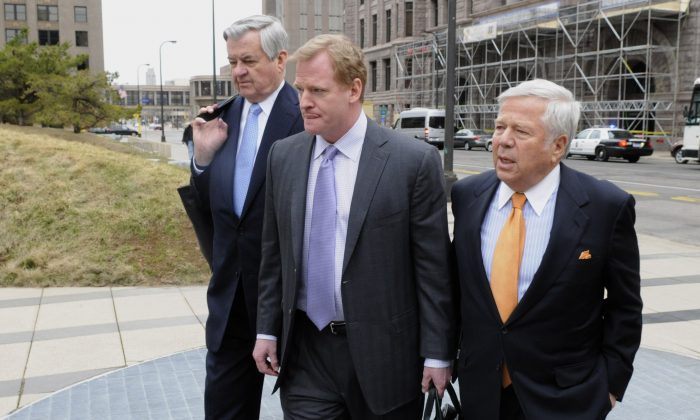 As if Deflategate didn’t produce enough offseason drama for the NFL already, ESPN’s latest report about the connection between it and the Spygate scandal that rocked the same league some eight years ago, has made waves across the country.

The overriding theme of the report was that NFL Commissioner Goodell had gone easy on the New England Patriots and owner Robert Craft—who has long been a strong ally of Goodell’s—in the Spygate scandal of 2007, and so the heavy Deflategate punishment principally against Tom Brady was to make up for it.

There are a number of other damaging assertions alleged in ESPN’s report, though. Here are the worst.

1. During the Spygate investigation, it was found that the Patriots had a “library” of scouting material containing videotapes of opponents’ signals going back seven seasons, that was accessible only to head coach Bill Belichick and a few others—including a trusted friend whose job was to decipher the signals.

Among the items found there were handwritten diagrams of the defensive signals the Pittsburgh Steelers used—including the notes used by New England in the 2002 AFC Championship game, which was won by the Patriots.

Goodell had the evidence destroyed right then and there.

This investigation, though, happened after Goodell’s punishment on the team ($250,000 fine, loss of first-round draft pick) and Belichick ($500,000 fine), which was announced just four days after NFL officials caught the Patriots red-handed.

2. Former New England coaches and employees said that during the pre-game warmups, a low-level Patriots employee would go into the opponents’ locker room and steal their play sheet, which listed the first 20 or so plays their offense would run. They would also send someone to the visiting team’s hotel to try to find playbooks or scouting reports.

There were also plenty of complaints that during crucial plays at Gillette Stadium, the radio line between the opponents’ quarterback and coach would go out. It occurred so often that a team even asked a league official to sit in the coaches’ box during the game and wait for it to occur. Right on cue, when a key third down came up, the headset went out.

3. During a meeting with former Sen. Arlen Specter—who was suspicious of Goodell’s swift investigation—former Patriots employee Matt Walsh said that three Patriots videographers were incidentally at the stadium during the St. Louis Rams’ walk-through leading up to Super Bowl XXXVI in 2001. They saw Rams running back Marshall Faulk returning kicks—something he had done only once during his career up to that point.

The Rams also ran their newly designed red zone plays during the walk-through.

When the Super Bowl came around, Faulk indeed lined up as a kick returner, but the Patriots kicked it toward the corner and Faulk gained just one yard.

Meanwhile, the Rams’ new red zone plays were largely ineffective in the Super Bowl, as New England was in proper defense nearly every time.

A Patriots assistant coach on that 2001 team once bragged to another coach that they knew exactly what plays St. Louis would call in the red zone. He explained the tip by saying “A little birdie told us,” according to ESPN’s report.

Years later, former Rams coach Mike Martz—who was the team’s coach in 2001—said on the very day Specter called for an investigation (June 5, 2008) Goodell called him and asked him to prepare a statement saying that he was satisfied with the NFL’s Spygate investigation and that the Patriots had not cheated.

Martz says he still had more questions, but he agreed that a congressional investigation “could kill the league.”

When Martz was shown a copy of his statement this past July, he was stunned to read several sentences about Walsh that he says he’s certain he did not write. “It shocked me,” he says. “It appears embellished quite a bit—some lines I know I didn’t write. Who changed it? I don’t know.”