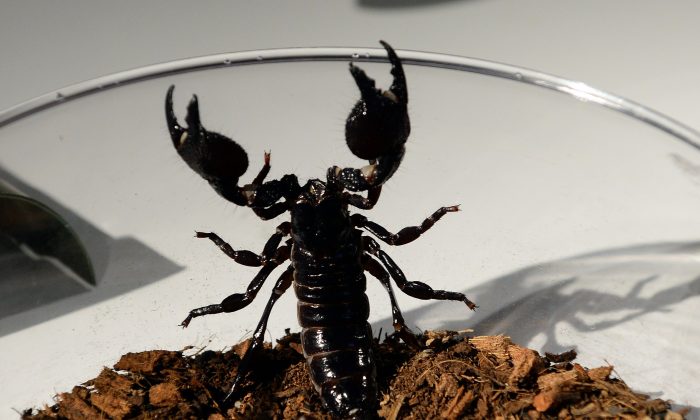 An emperor scorpion at the American Museum of Natural History in New York on July 1, 2014. (Don Emmert/AFP/Getty Images)
Middle East

Three people have died and hundreds more have been injured after heavy storms brought scorpions into the streets and homes of a city in southern Egypt, according to Egyptian state-run media.

Heavy rainfall, thunder, dust storms, and snowfall in the southern city of Aswan, Egypt, caused both scorpions and snakes to converge on the city last week, Al-Ahram, a government-run Egyptian newspaper, reported.

As of Nov. 13, at least 450 people were injured due to scorpion stings in the city, a health ministry official told Al-Ahram.

The victims have since been hospitalized, and anti-venom to disable and neutralize the venom has been made available at hospitals and medical units across the city. Extra amounts of the anti-venom have been sent to rural villages near the mountains.

Al-Ahram reported the deaths, citing Ehab Hanafy, the Health Ministry’s undersecretary in Aswan, but didn’t elaborate on the cause.

On Nov. 14, Gov. Ashraf Attia said that at least 503 people were hospitalized with injuries from scorpion stings, but had since been discharged after receiving anti-venom doses, The Washington Post reported.

Acting Health Minister Khalid Abdel-Ghafar said in a statement that no deaths were reported from scorpion stings, according to The Washington Post.

Health officials have also called in doctors who were on vacation to help treat the influx of patients. In the meantime, residents are being asked to stay inside their homes.

Attia ordered the suspension of vessel traffic in the River Nile from Aswan to Edfu, Egypt, as well as Lake Nasser, for a short period between Nov. 12 and Nov. 13. The governor also temporarily closed highways due to hazardous driving conditions caused by a lack of vision from the thunderstorms and heavy rainfall.

Egypt is home to fat-tailed scorpions, one of the most deadly scorpions in the world. Its venom can be potentially lethal to humans because its neurotoxic components act quickly in the body of victims to attack the central nervous system, causing paralysis and respiratory failure.

Ahmed Rizk, a professor at the Agricultural Research Center, told Al Watan newspaper that heavy rains had washed snakes and scorpions out of their hiding places, pushing them into people’s houses, especially those in higher areas.

Rizk urged people to stay away from mountainous areas where rain showers fall, noting that scorpions and snakes are active during times of high temperatures. The professor said anyone stung by a scorpion should tie a piece of cloth firmly near the bite to inhibit the venom from reaching the heart and go to the hospital immediately.