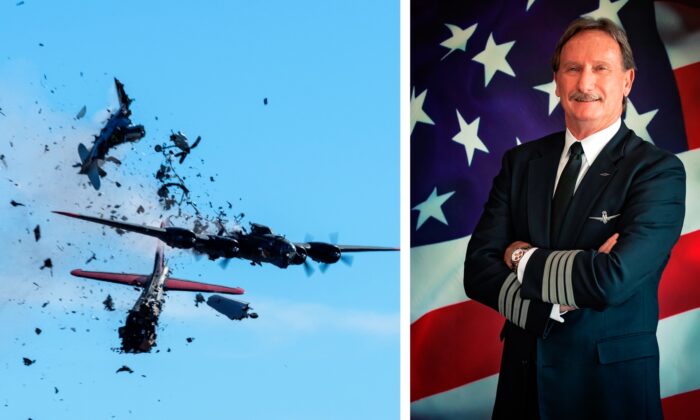 In this photo (L) provided by Larry Petterborg, a Boeing B-17 Flying Fortress and a Bell P-63 Kingcobra collide mid-air during an airshow at Dallas Executive Airport in Dallas, Texas, on Nov. 12, 2022. (Larry Petterborg via AP); An undated photo (R) of Terry Barker provided by his family. (Courtesy of Barker Family via AP)
By Lorenz Duchamps

At least three people who died over the weekend when two World War II-era planes collided mid-air during an air show in Dallas, Texas, have been identified.

Keller Mayor Armin Mizani said in a statement that Terry Barker, a former city councilman and U.S. Army Veteran, was one of the six people killed when a B-17 Flying Fortress bomber and a P-63 Kingcobra fighter plane collided before crashing to the ground in a ball of flames at the “Wings Over Dallas” event on Saturday.

“Barker was beloved by many. He was a friend and someone whose guidance I often sought,” Mizani wrote. “Even after retiring from serving on the City Council and flying for American Airlines, his love for [our] community was unmistakable.”

Pat McGrail, a former Keller mayor who served beside Barker when he was on the council, described him as a “thoughtful and caring person and politician who would be missed by all who knew him.”

Barker, a husband, father, and grandfather, retired from a 36-year career with American Airlines in 2020. He also served as a member of the Planning and Zoning Commission for about four years before being elected to the Keller City Council for two terms, serving the community from 1999 to 2003.

“I was fortunate to have him as a friend, and his guidance when it came to what was best for our residents never steered me wrong,” said Mizani.

Keller, a town of about 50,000 residents where many people know each other, is a suburb of Fort Worth. The mayor noted that Barker’s passing is “definitely a big loss in our community.”

The second victim has been identified as Len Root, a former crew member of the Allied Pilots Association (APA), according to a statement on Twitter posted by the agency.

We are saddened to report that former APA members CA Terry Barker and CA Len Root were among the crewmembers lost on B-17 Flying Fortress during the Wings Over Dallas airshow today. Our hearts go out to their families, friends, and colleagues past and present.

The third person killed in the accident was identified as Major Curtis J. Rowe, a more than 30-year veteran of the Ohio Wing Civil Air Patrol.

Rowe was a crew chief on the B-17, his brother-in-law Andy Keller told The Associated Press on Sunday. Rowe, of Hilliard, did air shows several times a year because he was in love with World War II-era aircraft, Keller said.

Video footage of the collision shared on social media showed the P-63 fighter plane colliding with the B-17 bomber, before they crashed to the ground, setting off a large ball of fire and smoke.

Dallas County Judge Clay Jenkins said in a statement on Sunday that officials will continue to work on the investigation and identification of the victims.

The Federal Aviation Administration (FAA) also announced that it was going to investigate, officials said. One of the key questions for investigators is why the aircraft were seemingly occupying the same space just before impact.

John Cudahy, the president of the International Council of Air Shows, said that typically at air shows there is a rehearsal where the pilots fly through the entire show to practice. So, the show on Saturday was actually the second time the pilots have flown the show. There are also detailed briefings each day to go over the plan for the air show and cover exactly where each pilot will be and their roles in the show.

“It’s still to early to figure out what happened yesterday. I’ve watched the tape several times and I can’t figure it out and I’ve been doing this for 25 years,” Cudahy said.

Investigators will examine the wreckage from both aircraft, conduct interviews of crews present at the air show and obtain pilot training and aircraft maintenance records.

“We’ll look at everything that we can and we’ll let the evidence basically lead us to the appropriate conclusions. At this point, we will not speculate” on the cause, Michael Graham, a member of the National Transportation Safety Board, said at a news conference.

A preliminary report from the NTSB is expected in four to six weeks, while a final report will take up to 18 months to complete.

The B-17, a cornerstone of U.S. air power during World War II, is an immense four-engine bomber that was used in daylight raids against Germany. The Kingcobra, a U.S. fighter plane, was used mostly by Soviet forces during the war. Most B-17s were scrapped at the end of World War II and only a handful remain today, largely featured at museums and air shows, according to Boeing.

The crash came three years after the crash of a bomber in Connecticut that killed seven, and amid ongoing concern about the safety of air shows involving older warplanes. The company that owned the planes flying in the Wings Over Dallas show has had other crashes in its more than 60-year history.