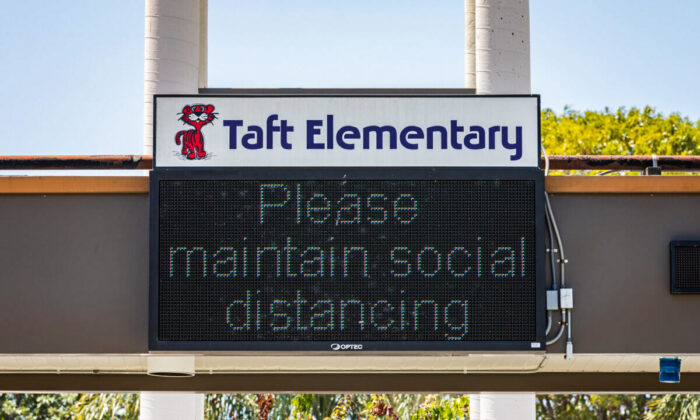 SANTA ANA, Calif.—Three children were injured on Monday, May 23, near Taft Elementary School when a man who had been asked to leave the Santa Ana campus struck them while driving away, authorities said.

The 911 call came in at 8:23 a.m., said Orange County Fire Authority Capt. Sean Doran. The children were taken to a hospital with injuries not believed to be life-threatening, Doran said.

The suspect had asked to use a bathroom on the campus at 500 Keller Ave., according to Fermin Leal of the Santa Ana Unified School District.

When asked if he was a parent, he said no, and when a staffer denied him entry he barged his way through the gate, Leal said. Other staffers, including the principal, surrounded him and instructed him to leave the campus, Leal said.

He was told again to leave after he got into his car in the school parking lot. He then got into the collision three or four blocks from the campus, Leal said.

The suspect was identified as Jason Guzman, 26, who was taken to a hospital to be treated for a self-inflicted knife wound, Santa Ana police Sgt. Maria Lopez said. It’s unclear when he sustained the wound, since school staff did not notice he was injured, Lopez said.

Guzman apparently drove onto a sidewalk and struck the children, Lopez said.