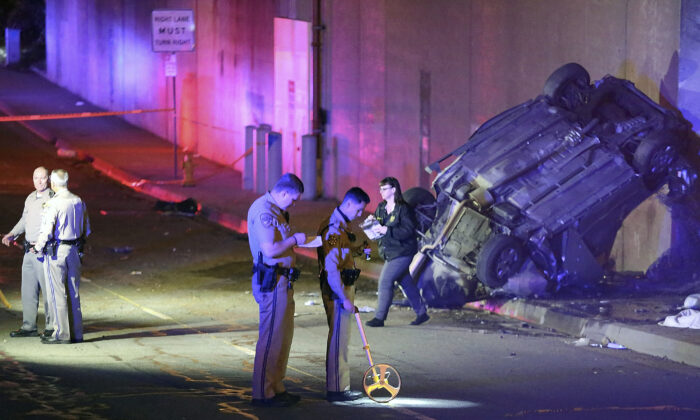 California Highway Patrol officers work at the scene of a fatal accident after the vehicle plunged off an elevated section of Interstate 210 landing below on Michillinda Ave., in Pasadena, Calif., on Jan. 16, 2022. (James Carbone/AP Photo)
Southern California

PASADENA, Calif.—Three teenage boys were killed in Southern California when the car they were in struck a curb, collided with a fence, and rolled over on an embankment, authorities said.

The single-vehicle crash happened around 8:30 p.m. Sunday near an intersection in Pasadena, according to the California Highway Patrol.

Preliminary reports that the 2005 Honda plunged off an elevated section of nearby Interstate 210 were inaccurate, the highway patrol said.

The sedan came to rest upside-down on a sidewalk underneath the highway overpass.

The cause is under investigation.