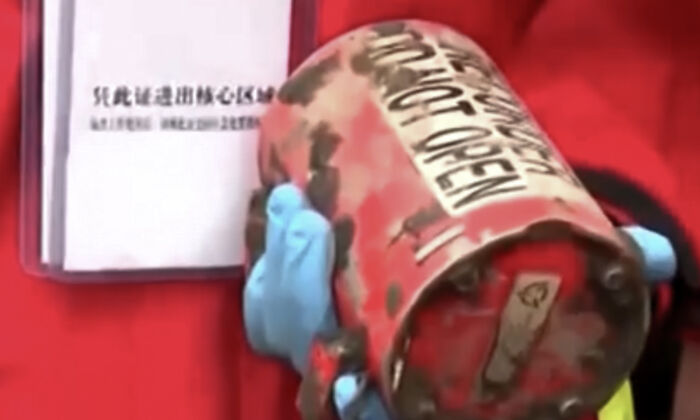 An image taken from video footage run by China's state broadcaster CCTV of a worker holding the second black box which recovered at the China Eastern flight crash site near Wuzhou city in southern China's Guangxi Province on March 23, 2022. (CCTV via Reuters/Screenshot via The Epoch Times)
China

The second black box, the flight data recorder, has been recovered from the wreckage of China Eastern Flight MU5735, which crashed in southern China, killing 132 people.

The black box was recovered five feet deep in the ground and about 130 feet away from the point where the plane crashed, Zhu Tao, director of the Office of Aviation Safety at the Civil Aviation Administration of China (CAAC), told a press conference on March 27.

Parts of the recorder were badly damaged, but the exterior of the data storage unit of the device appears to be in good condition, Zhu said, adding it has been sent to Beijing for analysis.

Retrieving the data from the two recorders is seen as key to understanding what caused the plane to suddenly go into a near-vertical dive and crash into a mountainside near Wuzhou city in southern Guangxi Province.

Flight MU5735 was cruising at an altitude of 29,000 feet after about an hour into its journey from the city of Kunming to Guangzhou. It lost more than 20,000 feet in a minute and briefly regained altitude for about 10 seconds before resuming its nose-dive into a hillside, FlightRadar24’s data show.

None of the 123 passengers and nine crew members survived, Chinese officials announced on March 26. The authorities said no traces of explosive materials were found at the crash site.

The sharp drop in altitude by the Boeing 737-800 is baffling aviation experts.

Flight data recorders store crucial details including airspeed, altitude, direction, and engine power. They can also record the position of wing flaps and whether the plane was flying by autopilot. Officials said on March 23 that the two black boxes of the crashed jet were manufactured by Honeywell, without specifying the models’ names.

The Chinese regime responded quickly to control the flow of information after the accident.

The country’s internet regulator has banned over 2,700 accounts and removed more than 279,000 posts deemed to be illegal and spreading rumors on social media platforms, including the Twitter-like Weibo and Quora-like Zhihu, China Cyberspace Administration said on March 26.

Read More
Explainer: What is Known About the Crash of China Eastern Airlines Flight MU5735

The investigation will be led by CAAC. It will also include a representative of the U.S. National Transportation Safety Board (NTSB) and representatives from Boeing and CFM, the General Electric Co.–Safran joint venture that made the engines. The NTSB has said that talks were ongoing with China to address COVID-19 quarantine requirements.

Investigators will look at the plane’s maintenance history, the training and record of the pilots, and weather data. They’ll examine pieces of the wreckage for clues. Even the size of the debris field is important. When wreckage is spread over a very large area, it could indicate the plane was breaking up before hitting the ground.