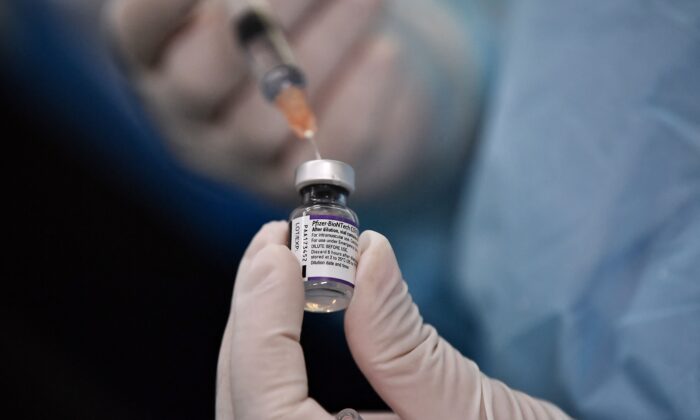 A health worker prepares a dose of the Pfizer COVID-19 vaccine at a school in Bangkok on Oct. 4, 2021. (Lillian Suwanrumpha/AFP via Getty Images)
Vaccines & Safety

Researchers studied 301 students across two schools in Thailand. The students were aged 13 to 18 and had received a dose of Pfizer’s vaccine without a serious adverse event. Most had no underlying disease, while 44 had conditions such as asthma and allergic rhinitis.

Researchers conducted laboratory tests to establish a baseline and followed up at intervals of three, seven, and 14 days after the students received a second dose of the vaccine.

Two of the children were hospitalized, with one being admitted to intensive care.

Limitations of the study, published ahead of peer review and funded by Mahidol University, included requiring parental permission for blood testing, which could have impacted participation.

Nearly 100 percent of the vaccine recipients recovered within two weeks, researchers said. Still, due to the detection of heart effects, young people receiving any of the vaccines based on messenger RNA technology—as are both the Pfizer and Moderna vaccines—”should be monitored for side effects,” the authors said.

Several cardiologists, after reviewing the new paper, said it adds to the body of evidence that the risks of the vaccines may outweigh the benefits, especially for young people.

“Any form of heart damage in young persons is concerning since the long-term risks of heart failure and sudden death with exercise are unknown,” Dr. Peter McCullough, the chief medical adviser for the Truth for Health Foundation, told The Epoch Times in an email.

“This is one of [about] 200 published papers demonstrating the risks of COVID-19 vaccination far outweigh any theoretical benefit.”

U.S. authorities have acknowledged a link between the Pfizer and Moderna vaccines and heart inflammation, but have maintained that the benefits of the shots outweigh the risks for all age groups older than 6 months.

According to reports collected by the Vaccine Adverse Event Reporting System through May 26, males aged 5 to 49, and females aged 12 to 29, had higher than background rates of myocarditis following a second Pfizer dose. The highest rate was 76 per million within seven days of a second dose among males 16 or 17 years old.

Dr. Anish Koka, a cardiologist in Philadelphia, said the new study results “are not reassuring.”

While the study authors said most patients recovered, some of the conditions they experienced were far from mild, Koka wrote in a blog post.

“The Thai study helps fill in some of the data void so parents and their doctors can be better informed when discussing the risks and benefits of the vaccines,” he said.