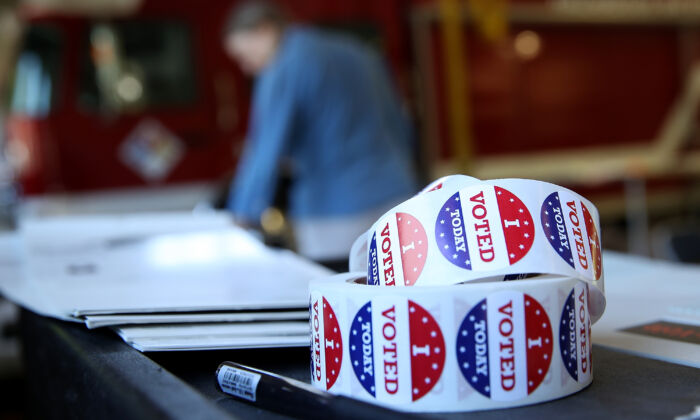 A roll of "I Voted" stickers sit on a table inside a polling station at a Ross Valley fire station in San Anselmo, Calif. on June 5, 2018. (Justin Sullivan/Getty Images)
2020 Election

Tens of millions of mail-in ballots went missing between 2012 and 2018, according to federal Election Assistance Commission (EAC) reports.

While there’s no evidence any of the 28.3 million unaccounted for ballots were used fraudulently, their sheer volume gives weight to concerns about election integrity, particularly as calls mount for more widespread use of vote-by-mail options amid the pandemic.

The drive to expand mail balloting options during the outbreak has emerged as the centerpiece of a growing political fight ahead of November’s election. President Donald Trump and Republican lawmakers have challenged the idea of expanding vote-by-mail, arguing it is vulnerable to fraud. Democrats, and voting rights groups, say it is a way to protect voters from the deadly CCP (Chinese Communist Party) virus, commonly known as novel coronavirus. They say a failure to guarantee that option amid a pandemic will disenfranchise millions of Americans.

“Putting the election in the hands of the United States Postal Service would be a catastrophe,” argues J. Christian Adams, President of the Public Interest Legal Foundation (PILF), which reviewed EAC reports from the past four general elections and compiled them into a single review (pdf).

“Over the recent decade, there were 28 million missing and misdirected ballots,” Adams said, adding, “These represent 28 million opportunities for someone to cheat.”

Of all types of voter fraud, absentee ballot fraud is the most common, according to an investigative report project by Arizona State University. Still, the project found that, since the turn of the century, “while fraud has occurred, the number of cases is infinitesimal.”

“Election fraud committed with absentee ballots is more prevalent than in person voting but it is still rare,” Richard L. Hasen, a professor of law and political science at the University of California, Irvine School of Law, and author of “The Voting Wars,” told FactCheck. “States can and do take steps to minimize the risks, especially given the great benefits of convenience—and now safety—from the practice.”

Meanwhile, concerns about fraud in mail ballots were significant enough that a 2008 report by the CalTech/MIT Voting Technology Project (pdf) recommended that states “restrict or abolish on-demand absentee voting in favor of in-person early voting.”

“I really think the only reason vote-by-mail problems are not getting more attention on a regular basis, is that it’s kind of an embarrassing problem and people just aren’t paying attention,” said Logan Churchwell, a spokesman for PILF, in remarks to RealClearPolitics. “These numbers of missing ballots demonstrate large voter list maintenance failures and security gaps within the broader mail voting process.”