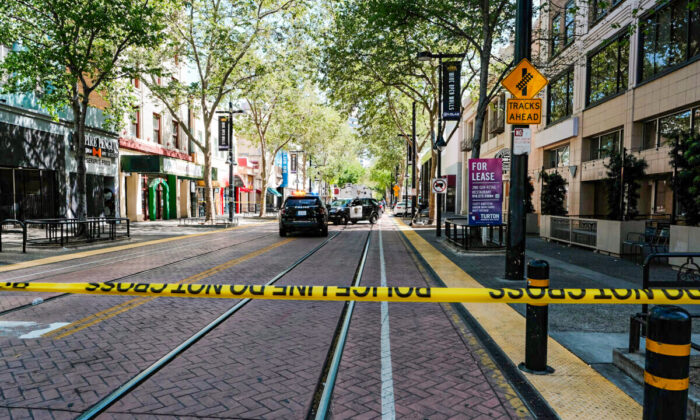 Police work the scene on the corner of 9th and K street after a shooting that occurred in Sacramento, Calif., in the early morning hours on April 3, 2022. (David Odisho/Getty Images)
Northern California

A 26-year-old suspect was arrested on April 4 in connection to a shooting on the morning of April 3 that left six people dead and more wounded in downtown Sacramento, California, according to police.

Dandre Martin, the suspect, was taken into custody on charges of assault with a firearm and being a prohibited person in possession of a firearm, Sacramento Police Chief Kathy Lester told KCRA 3 on April 4.

“Right now that’s really all we’re able to share about him,” Lester said. “As you know, this is a complex investigation, and we’re looking for multiple suspects, and so we’re currently working to identify what his role was the night of the shooting.”

In a statement from the police department, Martin is being classified as a “related suspect.”

“Investigators worked through the night into the early morning hours of April 4, 2022, processing the horrific K Street Shooting scene. During the preliminary processing of the scene, investigators located at least three buildings and three vehicles that had been struck by gunfire,” the statement reads.

The Sacramento Police Department SWAT and detectives searched three homes in connection to the case, recovering at least one handgun. They said that more than 100 shell casings were found at the scene of the crime near K Street and 10th Street.

“So we know that there were a lot of shots fired that night and hence the complexity of the investigation,” Lester said, noting that multiple alleged shooters are being sought.

The victims who were slain in the shooting were identified by the Sacramento County Coroner as Yamile Martinez-Andrade, 21; Johntaya Alexander, 21; Devazia Turner, 29; Joshua Hoye-Lucchesi, 32; Sergio Harris, 38; and Melinda Davis, 57, according to local reports.

Pop duo Aly and AJ wrote on Twitter that their tour bus was “caught in the crossfire but we sheltered in place and everyone in our touring group is ok.”

“Distraught by the mass shooting last night outside the venue in Sacramento,” they wrote. “All of our thoughts are with the families of those who lost their lives and those recovering today. We’re praying for the health care workers caring for them. We hope all our fans made it home safe.”

Following the shooting, President Joe Biden said Congress should pass more gun control laws, including bans on certain magazines, “assault weapons,” and “ghost guns,” although California has for years maintained bans on magazines with 10 or more rounds and numerous types of semiautomatic rifles.

“Repeal gun manufacturers’ immunity from liability. Pass my budget proposal, which would give cities more of the funding they need to fund the police and fund the crime prevention and intervention strategies that can make our cities safer. These are just a few of the steps Congress urgently needs to take to save lives,” Biden said.