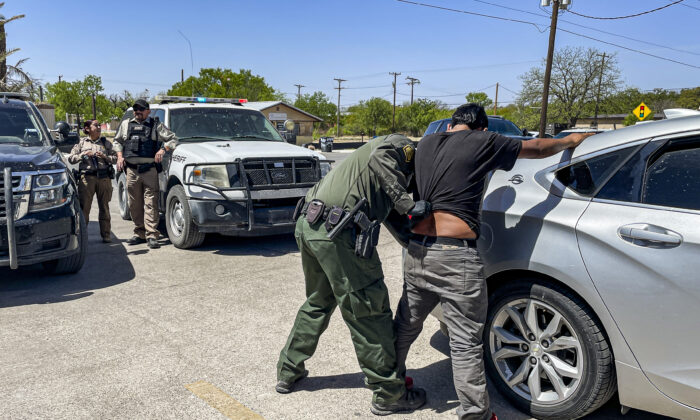 Twenty-six U.S. governors, all Republican, announced the creation of a Border Strike Force to “disrupt and dismantle transnational criminal organizations” on April 19.

The group of governors signed a memorandum of understanding, pledging to work together to “serve as a force multiplier to target cartels and criminal networks financially and operationally.”

“Together, governors will improve public safety, protect victims from horrific crimes, reduce the amount of drugs in our communities, and alleviate the humanitarian crisis at the Southern Border,” the agreement states.

“In the absence of federal leadership, states are partnering together to create the American Governors’ Border Strike Force to disrupt and dismantle transnational criminal organizations by increasing collaboration, improving intelligence, investing in analysis, combating human smuggling, and stopping drug flow in our states,” the agreement states.

The governors will coordinate to share intelligence, disrupt smuggling corridors, and assist border states. They plan to focus efforts on targeting cartel finances and border-related crime.

The participating states also plan to review state laws regarding human trafficking, drug trafficking, and transnational criminal organizations “to ensure that such crimes are prosecuted to the fullest extent of the law.”

States can request help from other participating states and state-specific certifications and licenses will be honored among the states. Each state is responsible for its own costs.

The Border Strike Force was announced days after Customs and Border Protection released its March statistics, which show the highest number of Border Patrol apprehensions—209,906—along the southern border since early 2000.

“Despite what the Biden Admin would have you believe, criminals, drugs & human trafficking don’t just stay on the border. They make their way to every state,” Reeves wrote on April 19.

“America’s governors are stepping up. Our multi-state partnership is designed to disrupt and dismantle the transnational criminal organizations taking advantage of the open border with Mexico,” Little wrote on Twitter on April 19.

Arizona Gov. Doug Ducey said his state has had a similar state-level border strike force in operation since 2015.

“What we’re doing in Arizona works,” Ducey said in an April 19 statement. “If our entire southern border isn’t secure, our nation isn’t secure.”

Correction: This article was updated to identify Tate Reeves as the governor of Mississippi. The Epoch Times regrets the error.