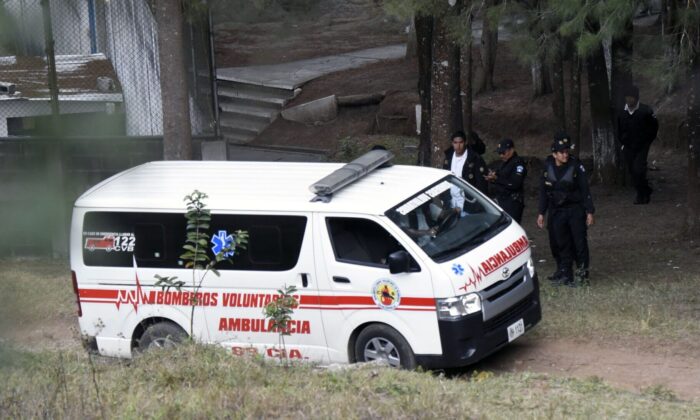 An ambulance is pictured in this file photo taken in San Jose Pinula, east of Guatemala City, on March 20, 2017. (Johan Ordonez/AFP via Getty Images)
Soccer

Guatemalan soccer player, Marcos Menaldo, has died after suffering from a heart attack during a training session on Jan. 3 in preparation for the new season, according to reports.

The 25-year-old central defender, who plays with Club Deportivo Marquense based in the Guatemalan city of San Marcos, collapsed during practice and was rushed to a hospital after receiving emergency CPR (cardiopulmonary resuscitation) at the scene of the incident.

The death of Menaldo, who was a fan-favorite and had recently been crowned champion of the Soccer First Division, was reported after he was transferred to the Hospital de Especialidades in San Marcos.

Hernán Maldonado, the president of the club, told ESPN that Menaldo was “a young, dynamic, and jovial person.”

“It was around 11:00 [a.m.] that they called me to inform me that Marcos had fainted in training,” Maldonado told the multinational sports channel. “They transferred him to the assistance center where they did everything possible, but unfortunately, the death was confirmed.”

“It is quite strong and shocking because you lose not only a player, you lose a friend,” he said. “God has his plans and his purposes, but unfortunately we have the death.”

Menaldo joined Club Deportivo Marquense in 2018 and was reportedly complaining previously of having difficulty breathing. The club hasn’t immediately provided a statement on more details about his death.

The tragic incident comes as some experts have said that the number of soccer players collapsing during matches or training has increased recently.

One prominent soccer star who suffered from a similar heart attack as Menaldo is Christian Eriksen, who collapsed on the field during Denmark’s Euro 2020 match last summer.

The Fédération Internationale de Football Association (FIFA), when asked if the increase in the number of players having cardiac arrests while on the pitch may be related to a large number of players getting a vaccine against COVID-19, said it is not aware of this claim and has not seen any cases attributed to individuals receiving the shot.

“FIFA is not aware of a rise in episodes of cardiac arrests as indicated in your email and no cases have been flagged in relation to individuals receiving a COVID vaccine,” the global soccer’s governing body said in a statement to news agency Reuters.