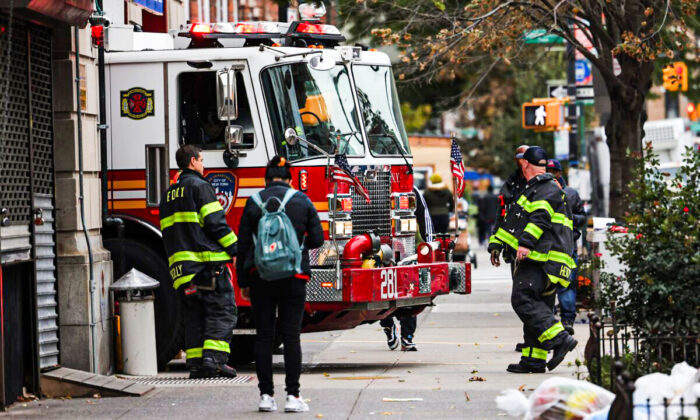 About one-fifth of New York City’s firefighters were unavailable to report for duty on Nov. 1, most of them because they weren’t in compliance with the city’s COVID-19 vaccination requirement. The fire department (FDNY) suspended training and maintenance and still ended up understaffed, though it maintained that operations hadn’t been affected.

As of Nov. 1, when the mandate for city workers went into effect, about 23 percent of the city’s 10,000 to 11,000 firefighters remain unvaccinated. Many of them likely applied for medical or religious exemptions and wouldn’t have faced being put on unpaid leave while their applications are pending. Yet many of them, it appears, have chosen over the past several days to take medical leave.

As a result, the department is about 2,300 firefighters short, according to Fire Commissioner Daniel Nigro.

A majority of firefighters on medical leave are unvaccinated, he said during the mayor’s press briefing. on Nov. 1.

“We know it’s related to a protest against the mandate. It’s obvious,” he said, calling the behavior “unacceptable.” Consequently, 18 out of 350 firefighter units were out of service, he said.

The FDNY would usually have about 20 units out of service on any given day from firefighters getting physicals or training or because of equipment maintenance. All those activities have been suspended to make up for the staffing shortage, Blatus said.

“Many units are understaffed,” Nigro said, urging firefighters to get the vaccine and get back to work.

Blatus said that the department’s operations haven’t been affected, and no firehouses have been closed.

Among the FDNY’s emergency medical technicians and paramedics, 88 percent are vaccinated. Among civilian employees, the number reached 91 percent, the department said in a Nov. 1 Twitter post.

He also mentioned that the city is watching city workers unions for any violations of the Taylor Law, which, among other things, bans strikes by public employees in the state.

For the entire city workforce of some 400,000, about 9,000 were put on unpaid leave for refusing the shot, de Blasio said during the briefing.

Among police officers, 15 percent were still unvaccinated as of Nov. 1, but the “vast majority” of those applied for exemptions, NYPD Commissioner Dermot Shea said during the briefing.

As a result, only 34 officers were put on unpaid leave due to lacking vaccination out of a force of about 35,000, he said.

A total of about 12,000 city employees have asked for medical or religious exemptions to the vaccination. The mayor said those employees are allowed to work until their applications are processed, including any appeals they may submit.

“It will take days to play out,” he said, adding that “for the vast majority of people, of course, the decision is no, they do not get an exemption, they have to get vaccinated, get to work.”

He noted that among employees of the city’s Department of Education, which faced the vaccination mandate weeks earlier, “relatively few [exemptions] were granted.”