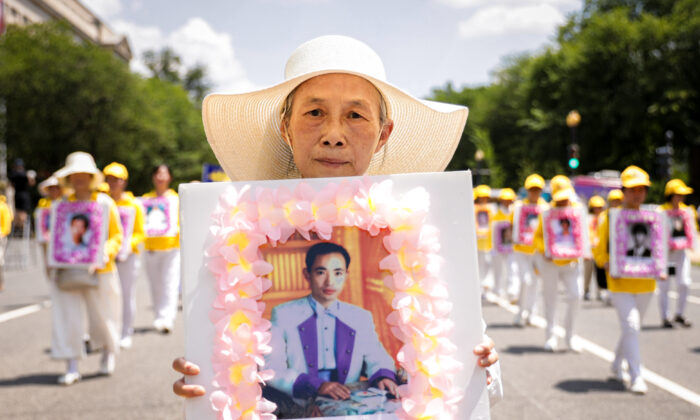 Falun Gong practitioners take part in a parade marking the 22nd anniversary of the start of the Chinese regime's persecution of Falun Gong, in Washington on July 16, 2021. (Samira Bouaou/The Epoch Times)
By Eva Fu

WASHINGTON—Fang Siyi can’t remember how many times she was arrested before she escaped communist China.

A 51-year-old practitioner of Falun Gong, a spiritual practice known for its core tenets of truthfulness, compassion, and tolerance, she lost two siblings to the Chinese Communist Party’s (CCP’s) sweeping persecution targeting her faith since 1999. One was beaten to death, the other was forced to leave her home and died a few years later after the pressure of the clampdown took a toll on her health.

Fang herself was constantly harassed and detained by police in her hometown of Jilin, a city in northeastern China. In 2001, she was arrested for providing refuge to two fellow adherents, who were in the Chinese military. While detained, she was regularly injected with a toxic drug for a period of two months. The drugs caused her belly to swell. Later, starting from her toes, her skin began to take on the color of an eggplant: an opaque black-purple hue.

She lost more than 55 pounds over that detention period.

In a labor camp designated for female Falun Gong practitioners, Fang was deprived of sleep and shocked with electric batons on her private parts. Another adherent, an unmarried woman in her 20s, also went through such electrocution. She lost her mind on the spot and never returned to normal, Fang told The Epoch Times.

Fang, who fled to Thailand in 2006 and later came to the United States, was one of the roughly 70 million to 100 million caught under the nationwide eradication campaign, initiated by the CCP that deemed the discipline’s popularity a threat to its rule.

At a July 16 rally on Capitol Hill marking the 22nd year since the persecution’s launch, Fang, together with an estimated 1,500 practitioners, silently gathered in their signature yellow shirts, holding banners calling for the end to the human rights abuses. Toward the front lay rows of wreath-lined displays, each featuring the face of a life lost.

Minghui.org, a website established in the United States to document the persecution, has tracked down the details of over 4,500 victims, but notes that the true death toll is likely vastly greater due to the difficulty of obtaining information from China.

The Congressional-Executive Commission on China, a body led by bipartisan U.S. lawmakers, on Friday highlighted the “horrific abuses” that Falun Gong practitioners has suffered. It for “an immediate end to this repression” and an investigation by the United Nations Human Rights Commission.

The commission’s political prisoner database contains 484 Falun Gong adherents currently detained in China, some of them sentenced to over a decade in jail. Cui Fenglan, a school librarian from Harbin city in China’s northernmost province of Heilongjiang, was sentenced to a 15-year jail term for purchasing an ornament with the words “truthfulness, compassion, and tolerance,” Minghui reported in 2017.

Millions of practitioners have experienced various forms of detention, and hundreds of thousands have been tortured over the past two decades, according to the Falun Dafa Information Center. Meanwhile, the CCP has also caused an untold number of deaths through the crime of live organ harvesting—a state-sanctioned abuse targeting primarily the adherents that still continues today.

Liu Xitong, a calligrapher from eastern China’s Shandong Province who was also repeatedly detained, said he was hit on the bones all over his body with wooden sticks, while being slapped on the head with shoe sole. The torturers also stood on his head and body to prevent him from moving, he said.

The pain was so excruciating that he wanted to die right then.

Liu said that prisoners also repeatedly pinched his skin from head to toe, a torment he likened to “skinning” and made him scream while rolling on the ground. His skin began to fester and then rot as a result.

‘A Shame Upon the World’

The regime has been able to carry out the campaign against Falun Gong with impunity because the group was not well known outside of China when the persecution began, said Christine Lin, creative director for advocacy group Friends of Falun Gong.

Over the past two decades, the CCP has been able to perfect this persecution model to use on the victim group, Lin told The Epoch Times.

“Because of that stretch of time the CCP has been able to use Falun Gong practitioners as guinea pigs with the best torture methods, the best ways to use psychiatric drugs on people, the best ways to do forced labor and forced organ harvesting,” she said.

“With that experience, they have now found how lucrative it is—to take organs from people, to force them to make products without any pay.”

Now, she said, “it’s our task to make sure that their persecution doesn’t get exported around the world.”

Lin added that understanding the regime’s campaign against Falun Gong was key to recognizing “the psychology of the Chinese Communist Party,” and its desire to “dictate everything down to the minute thoughts in your mind.”

Dede Laugesen, executive director of the Save the Persecuted Christians, told The Epoch Times that the global community’s failure to respond to the suppression was “a shame upon the world.”

But with “more and more revealed through the pandemic of this last year, the world is waking up to the crimes of Communist China,” she said.