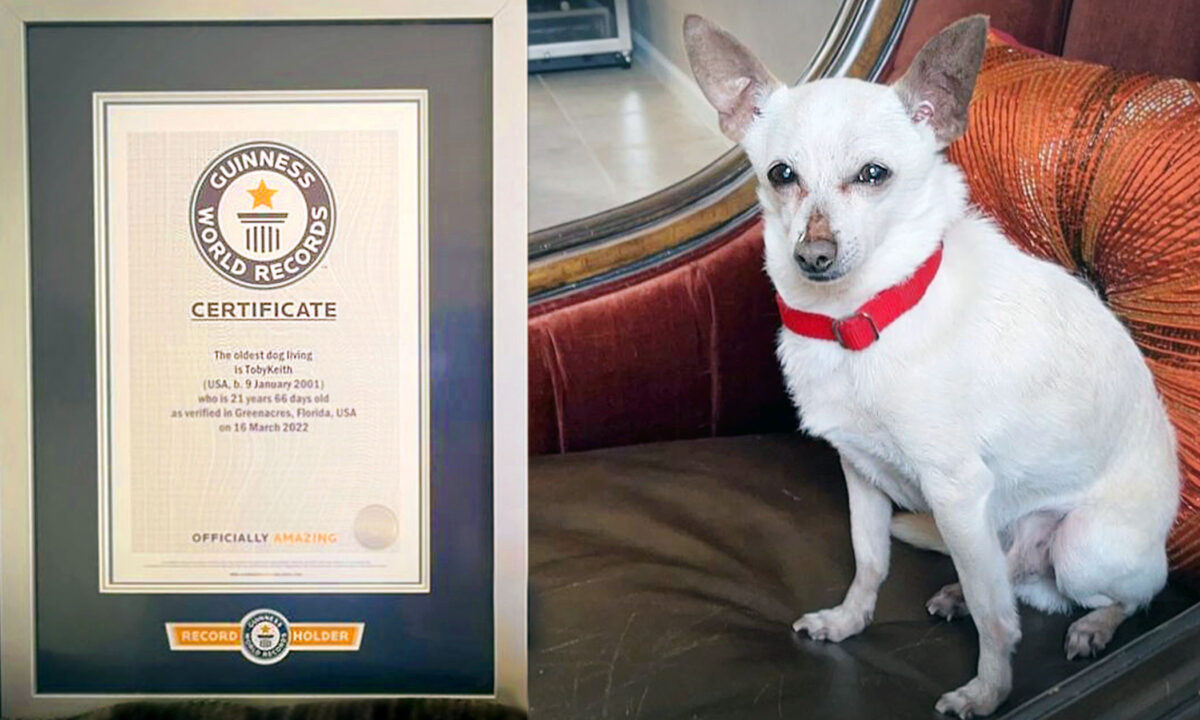 A well-aged Chihuahua in Palm Beach County, Florida, has been officially named the “world’s oldest dog living,” according to Guinness World Records.

TobyKeith was 21 years, 66 days old on March 16 when he garnered the impressive title for himself, and plenty of excitement for his owner, Gisela Shore, from Greenacres, who adopted the tiny pooch from the shelter where she volunteered when he was just a few months old over two decades ago.

“I was a volunteer at Peggy Adams Animal Rescue and one of the employees told me about an elderly couple trying to surrender a puppy because they could not take care of him any longer,” Gisela said.

“I met with the elderly couple and I was introduced to a tiny tan Chihuahua. They had named him Peanut Butter. I later changed his name to TobyKeith.”

After two decades of living together, his owner began to wonder.

“When he turned 20 years, everyone’s reaction was WOW!” she said. “My friends and family thought he was the oldest dog they knew about.”

When the world record was realized, she and her family were thrilled. “It definitely brought a big smile on my face!” she said.

In celebration, TobyKeith got a bath, got his nails trimmed, and went for a car ride.

“People can’t believe how good he looks for his age,” the owner added.

The average lifespan for Chihuahuas is between 12 and 18 years, according to Guinness.

The canine carer has fostered 150 dogs over the years. Other members of Gisela’s pet family include: American pit bull Luna, 7; Chinese crested Lalla, 3; as well as two parrots: Coco, 28, an umbrella cockatoo; and Coqui, 32, an African grey. TobyKeith has a special relationship with Coco, and often walks around with her in tow.

The key to TobyKeith’s long life is plenty of exercise and a healthy diet of vegetables, rice, and chicken, with no sugary treats; he also enjoys a slice of turkey in the morning—which is his favorite. Gisela notes that healthy genes and a loving home also make a difference. TobyKeith does have a heart condition, but it doesn’t cause him much trouble.

“TobyKeith is my little bodyguard,” she said. “Follows me everywhere. Lays on me while we watch TV. I adore him!”

The oldest dog recorded is an Australian cattle dog named Bluey. Owned by Les Hall of Rochester, Victoria, Australia, who got him as a puppy in 1910, Bluey worked with cattle and sheep for nearly 20 years before he was put to sleep on November 14, 1939, at the ripe age of 29 years and 5 months.