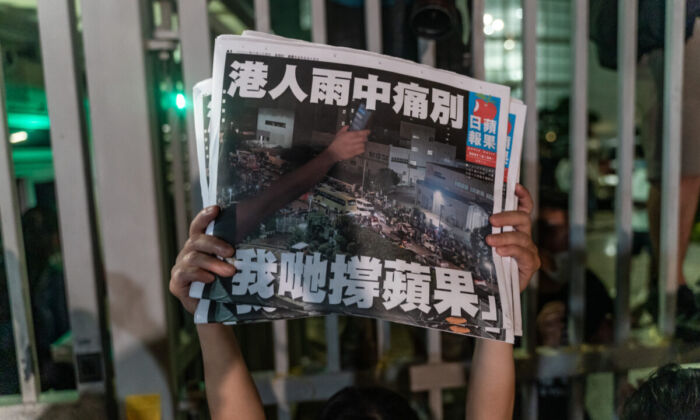 An employee holds up the latest copies of the Apple Daily newspaper outside at the offices in Hong Kong, on June 24, 2021. (Anthony Kwan/Getty Images)
Chinese Regime

The United States and 20 other countries have issued a joint statement expressing concern about the current and future outlook of press freedom in Hong Kong.

The group of 21 governments—part of the “Media Freedom Coalition” that was established in 2019 to advocate for press freedom and the safety of journalists—pointed to the recent forced closure of Apple Daily, a major pro-democracy newspaper in Hong Kong, and the arrest of the paper’s staff.

“The use of the National Security Law to suppress journalism is a serious and negative step which undermines Hong Kong’s high degree of autonomy and the rights and freedoms of people in Hong Kong, as provided for in the Hong Kong Basic Law and the Sino-British Joint Declaration,” the July 10 statement reads.

Freedoms in the financial hub have been disappearing at an alarming rate after the Chinese Communist Party’s (CCP) imposition of its draconian national security law last summer. Since then, dozens of the city’s pro-democracy opposition leaders are now either facing prosecution or sitting in jail, if they haven’t already fled overseas as political refugees.

Recently, Amnesty International stated that the law “has put Hong Kong on a rapid path to becoming a police state and created a human rights emergency for the people living there.” Reporters Without Borders called on democracies around the world “to put more pressure on the Chinese regime to end its authoritarian policies and ensure the restoration of press freedom” in Hong Kong.

On June 17, 500 police officers raided Apple Daily’s newsroom and froze millions of the paper’s assets, effectively putting the paper out of business. The paper printed its final edition on June 24 and has since closed down its social media accounts.

Two of the paper’s senior executives—CEO Cheung Kim-hung and Chief Editor Ryan Law—are accused of collusion under the national security law. They’re now in detention after being denied bail last month. Their next court hearing is scheduled for Aug. 13.

Two Apple Daily writers, Fung Wai-kong and Yeung Ching-kee, were arrested in late June. Fung has since been released on bail.

Apple Daily founder Jimmy Lai has been serving prison terms on charges related to his support of Hong Kong’s mass protests two years ago, amid the height of the anti-CCP, pro-democracy movement that started in June 2019. Lai is also awaiting trial for a separate “national security” case.

“The action against Apple Daily comes against a backdrop of increased media censorship in Hong Kong, including pressure on the independence of the public broadcaster and recent legal action by the Hong Kong authorities against journalists,” the group stated.

“It indicates that ‘white terror’ is everywhere,” HKJA stated. “It reflects press concerns over the possibility of literary inquisition, and their hugely shaken belief in the [Hong Kong] government and law enforcement’s commitment to protecting press freedom.”

White terror is a common expression to describe a climate of fear. Literary inquisition is commonly used to describe the persecution of scholars and intellectuals for their “speech crimes” or nonconformist writings in ancient China.

The group of governments also said they were “highly concerned” about the possibility of new legislation being implemented in Hong Kong that “could risk being used to eliminate scrutiny and criticism by the media of the government’s policies and actions.”

The Hong Kong government has talked about implementing “fake news” legislation for months, after pro-Beijing Hong Kong leader Carrie Lam first proposed the idea in February. She repeated her call in May, when she said the law would be used to prevent “misinformation, hatred, and lies.”

However, the proposed legislation has drawn strong criticism from media groups, including HKJA, the Foreign Correspondents’ Club in Hong Kong, and the International Federation of Journalists (IFJ).

“Fake news laws have become synonymous with governments and public figures targeting genuine reporting that reveals information that some do not want told,” IFJ stated in May, in response to Lam’s comments.

The group has called on the Chinese regime and the Hong Kong government to uphold press freedom “in line with China’s international legal obligations.”