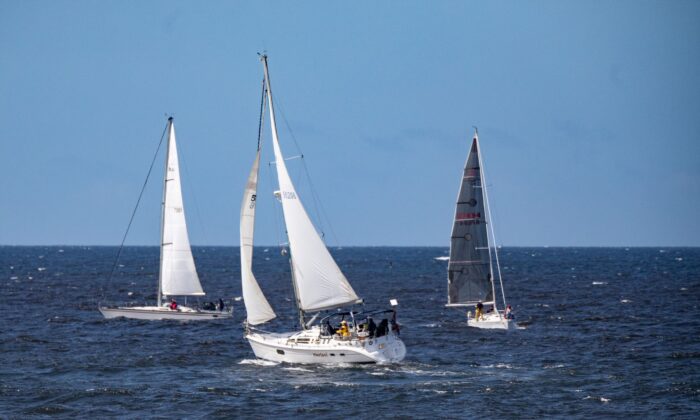 NEWPORT BEACH, Calif.—Sailors were greeted with strong winds upon a white-capped ocean at the start of the 74th Newport to Ensenada International Yacht Race on April 22, 2022.

On Newport Beach’s Balboa Pier, people gathered outside Ruby’s Diner to watch the start of the race.

“The Newport to Ensenada International Yacht Race (N2E) is one of our community’s signature events, and a key part of Newport Beach’s nautical heritage.” the city’s Mayor Kevin Muldoon said in a statement. “We are honored to be part of the 74th race and to co-host the race once again with our friends in Ensenada, Mexico.”

As sailors made their ships complete a sharp turnaround just North of the Balboa Pier, one woman gasped as a ship looked as if it were to capsize—only to even off and point the ship southward toward Mexico.

Race crews signing up for the yacht race were given instructions on sailing into Mexican waters and provided with a list of documentation required by Mexican customs, which included vessel documentation, passports, a Temporary Import Permit (TIP), a COVID health inspection, and a vaccination card (if vaccinated).

The 2022 race, which lasts from April 22–24, had 167 entries and memberships with over a dozen various yacht clubs throughout California.