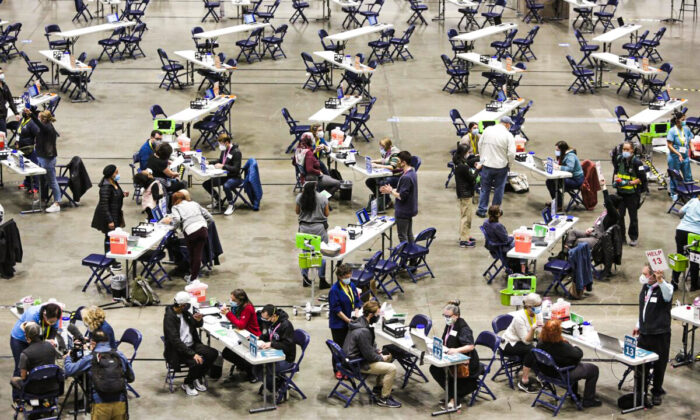 With the turning of the calendar to a new year, 2021 became the second year defined by the CCP (Chinese Communist Party) virus pandemic and the global response to it. Compared to 2020, last year was deadlier, but also more complicated. Issues such as virus variants, vaccine resistance, and vaccine efficacy have come to the forefront.

Mandatory vaccination went from a “conspiracy theory” to official policy in a matter of months. Increasingly prominent also were legal battles over government restrictions on the population, with approaches taken by different states further diverging.

While 2021 started with a massive wave of COVID-19-related hospitalizations, there also was an expectation that the pandemic would soon end or at least fade into the background. Vaccination was billed as the ticket to normalcy, and initially, it looked that way. By mid-June, about 180 million Americans had received at least one dose of one of the approved vaccines and even states with the most authoritarian approaches, such as New York, had lifted most of their restrictions.

However, the respite was brief. In July, infections began to spike again. The CCP virus mutated into a new variant, dubbed Delta, which appeared to be less deadly, but more infectious. Vaccine uptake slowed, and Delta appeared to be somewhat more resistant to it. The solution presented by authorities was to take yet another dose of the vaccine—a “booster.”

The virus also showed signs of seasonality. In the winter, it pummeled the Northeast, but not so much in the South. By summer, the situation seemed to reverse.

In August, President Joe Biden, plagued at the time by what was widely panned as a botched withdrawal from Afghanistan, announced a major policy shift—mandatory vaccination for government workers, contractors, and even private employers with more than 100 employees. Just months earlier, the administration was dismissing the idea of vaccine mandates. Any suggestion that the government might force people to take the novel vaccine, still in the process of long-term clinical trials, was even ridiculed by some as a “conspiracy theory.”

Soon after Biden’s announcement, some Democratic-heavy states and localities followed with various mandates of their own, with New York City spearheading the effort. Bit by bit, New York had mandated the shot for government workers, private school staff, most indoor establishment workers, and even patrons of gyms, entertainment venues, and restaurants. To see a movie, exercise, or eat indoors, a New Yorker now must show proof of “full” vaccination, which for now doesn’t include boosters, as well as photo ID. Outgoing Mayor Bill de Blasio also added a mandate for all private employers and the state mandated the vaccine for all health care workers.

Legal challenges to the mandates have been a mixed bag of failures and partial victories. Often, courts would block the mandate only to later allow it to go into effect. Challenges to Biden’s mandate for private employers and another for health care workers at facilities receiving Medicaid and Medicare funding are expected to be heard by the Supreme Court on Jan. 7.

Another phenomenon associated with Delta was an increase in severe illness and even deaths among children. While in 2020, about 0.05 percent of all COVID-19 deaths were among children, the number rose to 0.1 percent in 2021, according to the Centers for Disease Control and Prevention, making for a total of 678 deaths associated with COVID-19. For comparison, the agency recorded 358 pediatric deaths during the 2009–2010 flu pandemic.

With the winter approaching, about 50 million Americans got booster shots. If that was to give them a sense of security, however, it would be short-lived. Out of South Africa emerged a yet new variant capable of wide spread, named Omicron. There are indications that vaccines and, to a lesser extent, natural immunity acquired through previous infection only provide limited resistance to Omicron. On the other hand, the variant appears to be even more infectious, but again, less lethal than Delta, with reports of much milder symptoms and far fewer deaths worldwide.

The CDC estimates that Omicron comprised about half of COVID-19 infections in the week ended Dec. 25, 2021. Those are modeled projections, though, as data from its variant surveillance system lag by about three weeks.

Omicron or not, hospitalizations attributed to COVID-19 have surged in the Northeast. New York Gov. Kathy Hochul responded by again requiring people to wear masks in indoor establishments, regardless of vaccination status.

Republican-led states have generally gone in the opposite direction, not only refraining from mandates, but sometimes even outlawing them. Florida went as far as expressly prohibiting local governments and school districts from imposing mask and vaccine mandates on their staff or in their facilities. The state, led by Republican Gov. Ron DeSantis, also restricted private businesses from imposing vaccine requirements by carving out a number of exemptions, including for health concerns and prior infection.

Florida’s Legislature even authorized the state to ditch the federal Occupational Safety and Health Administration (OSHA) and create its own agency to preempt Biden’s vaccine mandate, which OSHA should enforce.

A series of documents released under Freedom of Information Act requests showed that a group of experts, including National Institute of Allergy and Infectious Diseases head and White House medical adviser Dr. Anthony Fauci, coordinated efforts to discredit the theory that the virus originally escaped from a lab in Wuhan, China. The evidence, in fact, appears to lean in that direction. But Fauci et al. have a personal stake in hiding those indications, since they were involved in financing or conducting dangerous “gain-of-function” experiments with coronaviruses at the Wuhan Institute of Virology. Fauci explicitly denied to Congress that the National Institutes of Health funded such research, only for a growing stack of evidence to indicate otherwise.

The information tug-of-war around potential therapeutics expanded last year. In addition to hydroxychloroquine, some doctors also tried off-label prescriptions of the anti-parasitic drug ivermectin. In one podcast episode, host Joe Rogan was both praised and vilified for taking ivermectin upon announcing that he tested positive for the virus. He then invited CNN’s Sanja Gupta on his show and criticized that network for claiming he took a “horse dewormer,” when, in fact, he had taken the human formulation of the drug as prescribed by his physician.

Study results on both hydroxychloroquine and ivermectin remain mixed, as only some show improved results in patients under certain circumstances.

The Biden administration’s handling of the pandemic has been mixed. The administration managed a smooth rollout of the vaccines, but after the initial wave, the uptake has since slowed. Gallup reported in November that the percentage of adults who are or plan to get vaccinated plateaued at 80 percent. By Dec. 30, more than 205 million people were “fully” vaccinated, meaning the completion of two shots of the Moderna or Pfizer vaccines or one shot of the Johnson & Johnson vaccine. More than 68 million got boosters as well.

A December poll by the Trafalgar Group found that a large majority of American likely voters opposed new mandates and restrictions, regardless of new variants (pdf).

After months of promises to tackle the pandemic, Biden recently conceded that there’s “no federal solution” to it. Last year ended with more than 450,000 deaths attributed to COVID-19 and more than 33 million detected infections. That’s up 27 percent and 67 percent, respectively, from a year earlier.