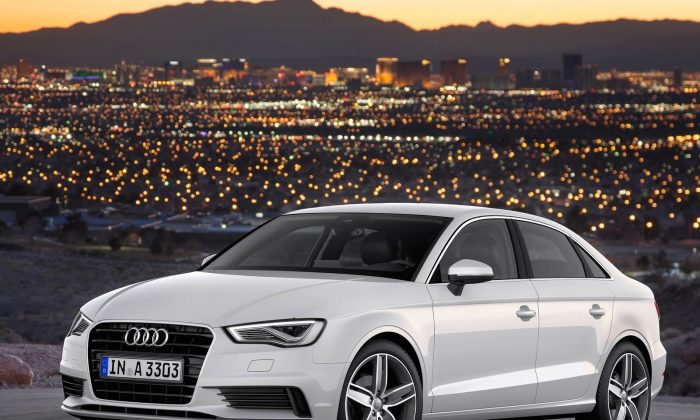 2015 Audi A3 (Courtesy of NetCarShow.com)
Autos

Size no longer defines the quality and overall excellence of an automobile. Looking back to the second half of the 20th Century, smaller generally meant cheaper in terms of build quality and level of equipment. This began changing a decade ago and now some of the most rapidly expanding segments in the luxury ranks are made up of smaller sedans and crossovers loaded with all the good stuff we expect from a premium vehicle.

A prime example is the all-new compact 2015 Audi A3 sedan. It features the same attention to interior detail, high level of standard equipment, and enjoyable driving experience as the larger more expensive Audi models including the A4 and A6, but at a fraction of the price.

The new smaller cars such as the A3, the Mercedes-Benz CLA250, and the BMW 2-Series coupe are making inroads because of younger buyers who are seeking luxury transportation on a budget; and perhaps even for empty nesters who want the look and feel of a quality car, but don’t need a bigger vehicle or the bigger price tag associated with it.

If you are one of those rare hatchback fans—we are included in that small group—the hatchback body style of the last A3 is no longer available in the U.S. But fear not, Audi says it will bring a version of the hatchback to North American shores later in the 2015 model year, as well as a convertible. In the meantime, the growing legions of fans of Audi’s attractive range of cars can now purchase a genuine, entry level, premium, luxury sedan from Audi for under $30,000.

We had the chance to spend a few hours driving a 2.0 Premium plus on winding hilly roads just south of San Francisco earlier this year and found this model with the quattro AWD system just about perfect. The car is small enough that we did not run out of space even on narrow roads. The handling is good without having a too-stiff ride.

We were delighted at how quick the 2.0-liter engine proved to be in a smaller sedan. It has been clocked by at least two auto magazines at a rather breathtaking 5.4 seconds from 0-to-60 and 14 seconds at 100 mph in the quarter mile. Stopping power moves to the head of the class, too, with 60-to-0 measured in a neck-snapping 108 feet.

The interior appointments are elegant, yet simple. If you opt for the navigation system, the screen pops up out of the top of the dashboard. Front seat passengers should have no complaints about space, but we did find the rear seat space a bit cramped. It’s okay for people of average height, especially if the driver is on the short side. At first glance the trunk space looks limited but it is deceptive. Also it’s nice to see the gooseneck hinges hidden so they don’t crush luggage when the trunk is closed.

While Audi has the usual safety equipment checked off, blind spot warning and a backup camera are not standard equipment. We consider this a major faux pas in an all-new, clean-sheet, entry level, luxury car; and considering, in a couple of years, the government will start mandating backup cameras in all cars regardless of price.

The base Premium model starts at $29,900 (plus $895 shipping) while the 2.0T quattro model starts at $32,900. There are plenty of options and packages available that can take the out-of-the-door price to $43,650. This would be the suggested retail price for the 2.0T Prestige model fully optioned with the Advanced Technology and Sport packages.

Incidentally, the Advanced Technology package, which includes Pre Sense front accident avoidance system, active lane assist, and adaptive cruise control with stop and go, is only offered when you purchase the Prestige model.

Our test car on home turf was the 2.0T quattro with several options including navigation, cold weather package, and aluminum style package. Also included was Glacier White metallic paint, a $550 option that came with a very rich looking chestnut brown and black interior. Bottom line was $37,195 including destination charge.