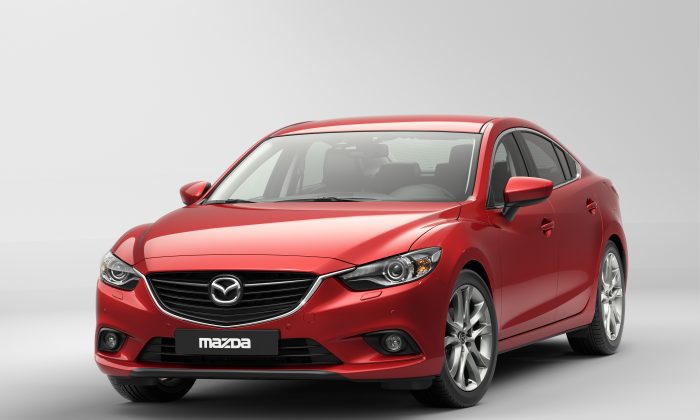 “Providing a Union Between Driver and Machine”
By Durhl Caussey
Print

Inside, the Mazda6 provides an energetic and artistic environment where the driver is relaxed while feeling, touching, and operating for an excellent driving experience.

The Mazda6 has a new SkyActiv–G engine (2.5 L DOHC 4-cylinder with VVT) that delivers an abundance of power (184-horsepower and 185 lb.-ft. torque), which works with other SkyActiv technologies to enhance the overall driving performance.

Mazda6 engineers have reduced the vehicle weight by almost 100 pounds, resulting in strong acceleration and lively handling with a six-speed automatic transmission. Not only does it handle well, but it seems to ramp up power quickly and has excellent fuel mileage.

The i-ELOOP regenerative braking system (part of the Technology Package) stores captured kinetic energy in a highly efficient electric double-layer capacitor (EDLC), which in turn powers the electric components during acceleration. The engine is thus relieved from the task of producing electricity, resulting in a fuel savings of as much as 5 percent.

In order to efficiently convert kinetic energy into electricity, Mazda uses a variable voltage alternator which can vary its output voltage from 12V to 25V to ensure a more continued supply of electricity to the capacitor. Because of this technology the driver no longer has to choose between fuel efficiency and performance.

The Mazda6 came with a 5.8-inch color touch screen, which can also be controlled through the Commander Switch knob and button group on the center console. This Commander button brings up feature screens such as audio, navigation, and hands free telephone. Navigation on the screen is controlled through a Commander knob which tilts to move the cursor and is pushed down to select.

All are positioned close at hand, so you can better concentrate on the drive. The Commander Switch group with the tilt-and-push knob, together with simple buttons and switches around it, enables a smooth and easy operation.

The Mazda handles superbly. The cabin is comfortable with wide armrests, and it’s easy to get in to because of the wide door frame. Controls are also easy with an uncluttered instrument panel and easily read features with conveniently accessible buttons.

There was an abundance of leg, shoulder, and hip room in the front. However, with both front seats extended backward to their fullest, there was not sufficient legroom in the back to generate comfort.

Inside the car was very quiet. Even unwarranted ambient noise was silenced by Bose AudioPilot, which constantly monitors the sound inside the cabin through a microphone, and distinguishes between music and unwanted ambient noise. Then proprietary digital signal processing, specifically for the Mazda6, automatically adjusts your music for optimal listening.

The interior of the Mazda6 has leather trimmed sports seats, including the 8-way power adjustable driver’s seat with memory system. Instruments and controls are trimmed with satin chrome. All this adds additional comfort and pleasure to the eye. Both the steering wheel and shift knob are covered with leather from the finest Japanese craftsman.

Outside, Mazda6 starts with the Kodo-design headlamps. The Grand Touring trim features LED headlamps with a light guiding ring, producing “a straight line of LED-generated light in each headlamp that forms a visual extension of signature ‘wing’ on the bumper.” With the headlamps on, the combination of the ring and straight line form a simple but instantly recognizable signal of the Mazda6 identity.

This vehicle is truly designed to turn heads. The class-leading aerodynamics and body design contribute to both high speed stability and fuel efficiency. The design shows the same dynamics at rest as it does in motion.

All the styling, features, and technology mentioned in this column are standard on the Grand Touring, unless specifically noted. The price is $29,695. The base Sport model with 6-speed manual transmission starts at $20,990.