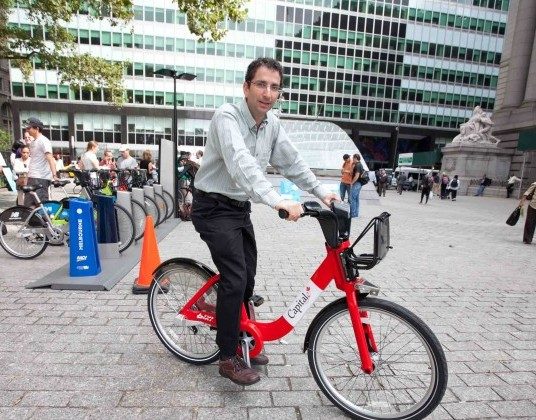 The pilot for a new bike share program to launch next summer. (Amal Chen/The Epoch Times)
US

NEW YORK—The winners for the 2011 NYC Streetsies were announced on Wednesday, with the Best Moment going to when Department of Transportation (DOT) Commissioner Janette Sadik-Khan announced the the selection of Alta Bikeshare to operate a public bike system in the city.

A poll conducted by Streetsblog in October, the host of the Streetsies Awards, showed that bike sharing is more popular than bike lanes. However, the extension of First and Second avenues bike lanes managed to make the Best Bike Project of the year.

The Best Pedestrian Project went to the DOT’s redesign of the Grand Army Plaza, which serves as an entrance to Prospect Park. More pedestrian islands, crosswalks, and bike connections were added to ensure pedestrian safety. Prior to the redesign; the plaza had been a hazardous area and described as an “11-acre vicious circle of traffic” by Commissioner Sadik-Khan.

The MTA Bus-Time on the B63 was chosen as the Best Bus Project because it allows riders to look up the location of the next bus via text message or checking their smartphones.

Streetsblog is a daily news source that focuses on sustainable transportation and livable communities. Streetsblog NYC reports on the five boroughs of the city and also important transportation policy developments in Albany.