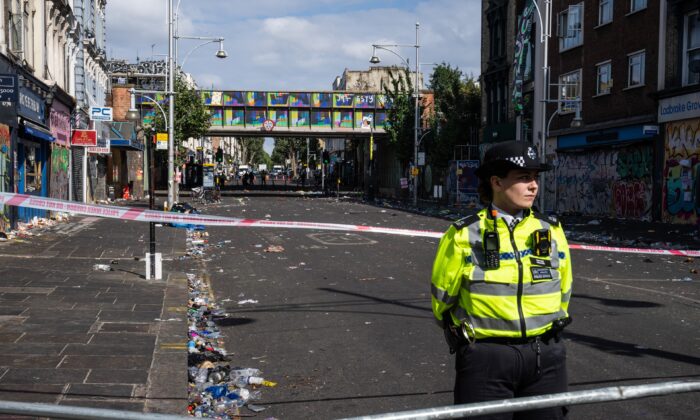 A police officer stands by the cordon at the scene of a fatal stabbing during the Notting Hill Carnival, in the Ladbroke Grove area of London, England, on Aug. 30, 2022. (Carl Court/Getty Images)
By Alexander Zhang

But the event was marred by violence and criminal activities. A 21-year-old man was stabbed to death, and 6 non-fatal stabbings were reported.

The Met said 74 officers were injured across the two days, some of which resulted from incidents involving assaults.

The Metropolitan Police Federation, which represents police officers, commented on Twitter: “This happens every year. It’s an utter disgrace. We wish all brave colleagues a swift recovery.”

According to the force, one of the female police officers affected was grabbed around the neck and kissed on her face without consent.

A 46-year-old man named Florin Matei was arrested and later charged with sexual assault and will appear in court on Sept. 19.

In the second instance, a female officer was “grinded” against by a group of men, who danced against her as other officers came to help her.

A police spokesperson said it was not possible to detain the group at the time, but an investigation is ongoing.

“We recognise the impact such offences can have and we will provide both officers with the support they need. Neither officer was physically injured,” the spokesperson said.

Ken Marsh, the chairman of the Metropolitan Police Federation, said the incidents were “disgusting.”

He told LBC radio on Wednesday: “We’ve seized dozens of knives over the course of the two days, we’ve stopped probably 200 or 300 fights, small, sporadic fights. This is not a fun-loving weekend.”

He said the police do not have the resources to deal with such a large event taking place in the streets, and said it should have been confined in a park.

Earlier, Marsh slammed the inaction of London mayor Sadiq Khan, saying he failed to act following years of violence at the carnival.

“He cannot keep watching every year and thinking it is acceptable,” he told LBC on Tuesday. “Tell us how you are going to make it safe. He is the police and crime commissioner after all.”

Khan had said earlier he was “sickened” by the fatal stabbing which took place on Monday.

“Violence has no place on our streets and we are doing everything in our power to root it out,” he wrote on Twitter.