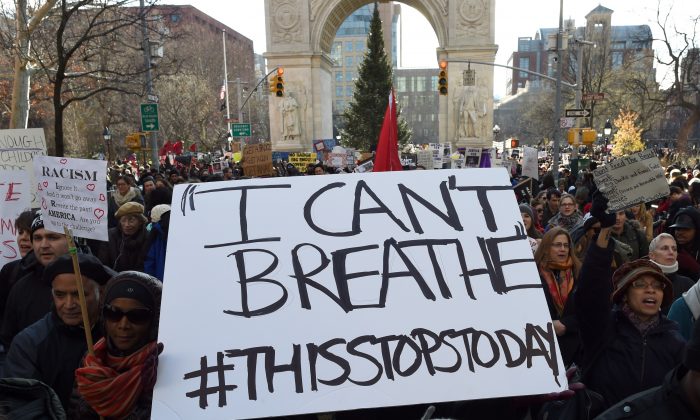 Protesters march on 5th Avenue during the Millions March NYC on December 13, 2014 in New York. Thousands of people marched in Washington and New York on Saturday to demand justice for black men who have died at the hands of white police, the latest in weeks of demonstrations across the United States. (Don Emmeret/AFP/Getty Images)
Crime and Incidents

Tens of thousands filled the streets over the weekend continuing protests against police violence and the grand jury decision to not indict an officer over the death of Eric Garner.

The protests have largely been peaceful, but early Sunday morning a man allegedly tried to throw a garbage can at police officers below him on the Brooklyn Bridge.

The police said two lieutenants were trying to arrest the 29-year-old Eric Linsker, when other protesters intervened. Linsker fled, but was arrested hours later.

The two lieutenants were treated for bumps and bruises, and a broken nose. They recovered a backpack containing three hammers and a black facemask, which police believe belongs to Linsker.

“Let us be clear: there is no place whatsoever for violence of any kind, whether against the police or against our fellow citizens, in New York City,” Mayor Bill de Blasio said, according to a press release.

Protests began early December, after a grand jury decision not to indict officer Daniel Pantaleo, who used a chokehold on Eric Garner. Several protesters have been arrested, but mainly for very minor infractions, the mayor said at a previous event.

De Blasio commended the peaceful and respectful nature of protests since, but said the incident on the Brooklyn Bridge was “an ugly and unacceptable departure from the demonstrations thus far.”

“The people of New York should be proud for how they have made their voices heard over these past several days, and the men and women of our police force should be commended for the professionalism, dedication, and restraint they have displayed throughout these marches,” de Blasio stated.