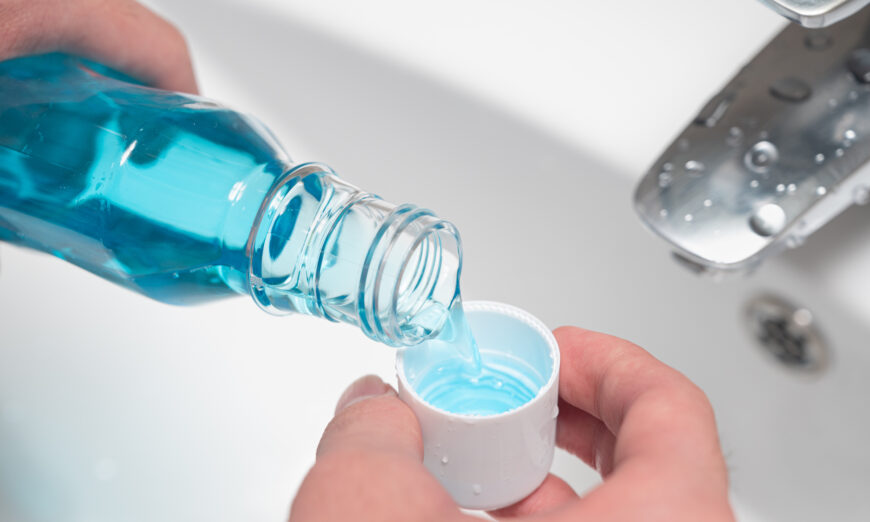 Two types of mouthwash disrupt SARS-CoV-2, the virus that causes COVID-19, preventing it from replicating in a human cell, a new study suggests.

The study in the journal Pathogens finds that, in a laboratory setting, Listerine and the prescription mouthwash Chlorhexidine disrupted the virus within seconds after researchers diluted it to concentrations that would mimic actual use.

Further studies are needed to test real-life efficacy in humans.

Researchers conducted the study in a lab using concentrations of the mouthwash and the time it would take to contact tissues to replicate conditions found in the mouth, says senior author Daniel H. Fine, chair of the oral biology department at Rutgers University’s School of Dental Medicine.

The study found two other mouthwashes showed promise in potentially providing some protection in preventing viral transmission: Betadine, which contains povidone iodine, and Peroxal, which contains hydrogen peroxide. However, only Listerine and Chlorhexidine disrupted the virus with little impact on skin cells inside the mouth that provide a protective barrier against the virus.

“As dentists, we’re right there in a patient’s face. We wanted to know if there’s something that might lower the viral load.’

“Both Povidone iodine and Peroxal caused significant skin cell death in our studies, while both Listerine and Chlorhexidine had minimal skin cell killing at concentrations that simulated what would be found in daily use,” Fine says.

Researchers studied the efficacy of mouthwash potential for preventing viral transmission to better understand how dental providers can stay protected from aerosols that patients exhale.

“As dentists, we’re right there in a patient’s face. We wanted to know if there’s something that might lower the viral load,” says coauthor Eileen Hoskin, an assistant professor at the School of Dental Medicine.

Fine cautions the public against relying on mouthwash as a way to slow the spread until it is proven in clinical trials on humans.

“The ultimate goal would be to determine whether rinsing two or three times a day with an antiseptic agent with active anti-viral activity would have the potential to reduce the ability to transmit the disease. But this needs to be investigated in a real-world situation,” he says.

Previous research has shown various types of antiseptic mouthwashes can disrupt the novel coronavirus and temporarily prevent transmission, but this was one of the first studies that examined antiseptic rinse concentrations, time of contact, and the skin-cell killing properties that simulated oral conditions.

A team of dental school scientists and virologist at the Public Health Research Institute conducted the study.

“Since the SARS CoV-2 virus responsible for COVID-19 enters primarily through the oral and nasal cavity, oral biologists should be included in these studies because they have an in-depth understanding of oral infectious diseases,” Fine says.

This article was originally published by Rutgers University. Republished via Futurity.org