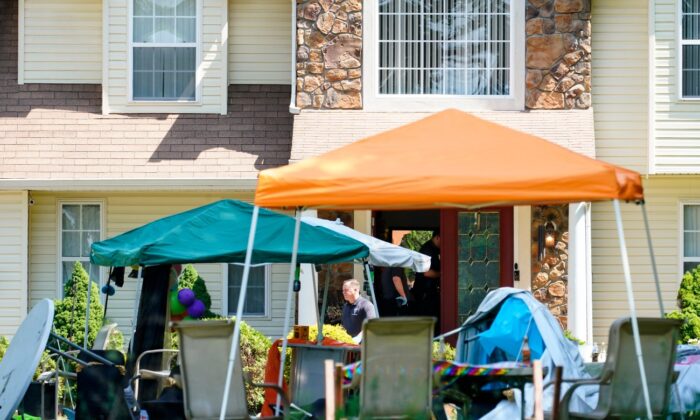 Investigators work the scene of a shooting in Fairfield Township, N.J., on May 23, 2021. (Matt Rourke/AP Photo)
Regional News

The New Jersey State Police said it’s investigating a shooting at a massive house party in Cumberland County late on May 22 that left two people dead and another 12 injured, including one in critical condition.

The state police, which provided scant details of the incident in a statement early on May 23, said that troopers responded to a residence on E. Commerce St. in Fairfield Township after a “report of a shooting with multiple victims.” Fairfield Township is located in the southern part of New Jersey, approximately 50 miles south of Philadelphia.

A 30-year-old man and a 25-year-old woman were killed, officials told ABC6 in Philadelphia. Their identities weren’t released to the public.

State police said that no arrests have been made in the case; no motive was provided by officials.

The shooting occurred as more than 100 people were attending a party, officials said.

“It was hundreds of people, our neighbors, who were just getting together because it was the first really warm, nice night. There were a lot of parties and get-togethers throughout the community, and this was probably the biggest,” Melissa Helmbrecht, who works for youth advocacy group Hopeloft, told WCAU-TV.

“I just started hearing at first what I thought was fireworks, it was really gunshots, and I heard nine in rapid succession,” said Rev. Michael Keene of the Trinity AME Church, which is across the street from where the shooting occurred, ABC6 reported.

Anyone with information should call the New Jersey State Police’s Bridgeton Station at (856) 451-0101, or can submit a tip via the Cumberland County Prosecutor’s Office tip website at www.njccpo.org/tips.