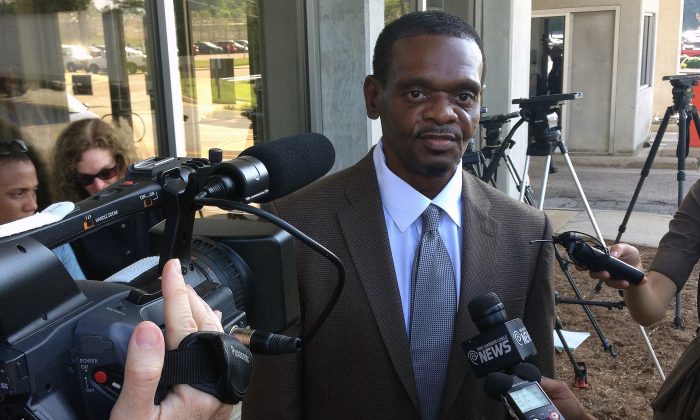 FILE - In a Wednesday, Sept. 3, 2014 file photo, Henry McCollum walks out of prison after being released from Central Prison in Raleigh, N.C. (AP Photo/Michael Biesecker, File)
Crime and Incidents

2 Brothers Pardoned, Clearing Way for Them to Receive $750K

RALEIGH, N.C. — When DNA evidence freed two brothers wrongfully imprisoned for an 11-year-old girl’s killing, each was given $45 by prison officials.

Nine months later, pardons issued Thursday by North Carolina’s governor have cleared the way for Henry McCollum and Leon Brown to receive $750,000 each from the state for spending three decades in prison. It’s been a long wait for the men who have been relying on help from family and donations while their application was pending.

The brothers’ family, friends and attorneys were jubilant in early September after a judge vacated their convictions and ordered their release, citing new DNA evidence that points to another man killing and raping 11-year-old Sabrina Buie in 1983.

But their freedom also came with difficult adjustments to the outside world. When McCollum walked out of death row, he needed help putting on the seatbelt in his father’s car. At the time, he had never owned a cellphone and was unaccustomed to the Internet.

On Thursday, Gov. Pat McCrory said his decision came after a comprehensive process that included meetings with Brown, who’s 47; and McCollum, who’s 51.

“I’m not going to rush into making an important decision. I’m going to do the right thing,” he said.

McCollum had been the longest-serving inmate on North Carolina’s death row. His half brother Brown had been serving life in prison.

“We are so grateful for the governor granting us a new lease on life, for our family and those who believed in our innocence, and all of the lawyers who worked so hard to get us here today,” the men said in a statement released by their lawyer, Patrick Megaro.

The brothers didn’t attend the governor’s announcement. They said earlier this year that they have had a hard time since their release.

“I can’t do nothing to help my family,” McCollum told the Raleigh News & Observer in January. “They’re not able to pay their bills.”

The newspaper reported that lawyers at the Center for Death Penalty Litigation in Durham held a fundraiser for them, and others donated money after reading about the case.

The pardon qualifies the brothers for $50,000 from the state for each year they were imprisoned, with a limit of $750,000. The compensation still needs to be approved by a state agency, but it is considered a formality.

In September 1983, Buie was found in a soybean field in rural Robeson County, naked except for a bra pushed up against her neck. A short distance away, police found two bloody sticks and cigarette butts.

Defense attorneys have said the brothers were scared teenagers who had low IQs when they were questioned by police and coerced into confessing. McCollum was then 19, and Brown was 15.

The DNA from the cigarette butts doesn’t match Brown or McCollum, and fingerprints taken from a beer can at the scene weren’t theirs either. No physical evidence connects them to the crime, a judge and prosecutor acknowledged last fall.

Based largely on their confessions, both were initially given death sentences, which were overturned. Upon retrial, McCollum was again sent to death row, while Brown was convicted of rape and sentenced to life.

Current Robeson County District Attorney Johnson Britt, who didn’t prosecute the men, has said he’s considering whether to reopen the case and charge the other man, whose DNA was found on a cigarette butt from the crime scene. The cigarette butt was tested as part of the recent investigation by the North Carolina Innocence Inquiry Commission, a one-of-its-kind investigative panel.

The inmate whose DNA was on the cigarette is already serving a life sentence for a similar rape and murder that happened less than a month after Sabrina’s killing.

Ken Rose, a lawyer who represented McCollum for 20 years, said he’s thrilled by the pardon.

“We’re very happy that the governor reached this decision, but not at all surprised,” Rose said. “None of us have any doubt that they are innocent. And finally the state has acknowledged actual innocence.”

Still, he said he’s frustrated that it took so many years to clear their names.

“If we continue executions, we are going to be executing some innocent people on death row,” he said.