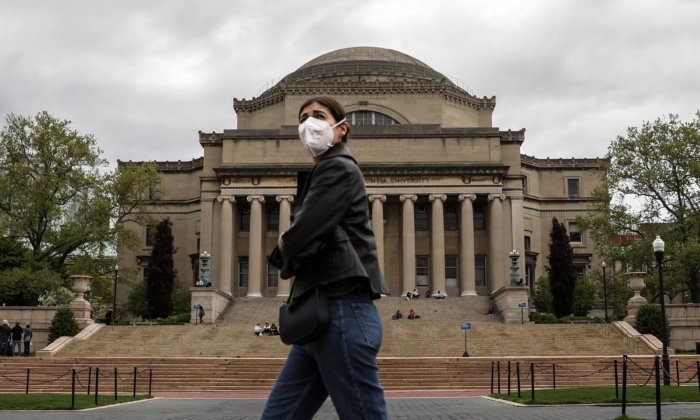 2.4 Million US College Students Face Vaccine Mandate, Immune or Not

More than 180 college and university campuses across the United States are requiring more than 2.4 million students to produce proof of vaccination against the CCP (Chinese Communist Party) virus to attend in-person classes this fall, regardless of whether the students have acquired immunity to the virus.

The number of schools with a mandate is likely to grow by the beginning of the school year, especially if the Food and Drug Administration grants full approval for one or more vaccines in the coming months. Despite evidence that prior infection leads to broad and lasting protection from the virus, none of the schools currently accept acquired immunity as an exemption from the vaccination mandate, according to an Epoch Times review of more than 130 university vaccine mandate notices and immunization requirement pages.

Only a handful of the four dozen schools contacted for this article offered direct responses for why infection-conferred immunity isn’t being considered as an exemption. The vast majority responded by referencing their immunization exemption rules, which don’t address acquired immunity. When pressed for an answer, several schools said they couldn’t offer more information, while others said they are still finalizing their policies.

The few that responded pointed to guidance by the Centers for Disease Control and Prevention (CDC), which advises people with acquired immunity to still be vaccinated because “experts do not yet know how long you are protected from getting sick again after recovering from COVID-19.”

COVID-19 is the disease caused by the CCP virus, commonly known as the novel coronavirus.

“BSU will not be offering exemption based on prior infection,” Dr. Christoper Frazer, executive director of the Wellness Center at Bridgewater State University in Massachusetts, told The Epoch Times.

“For students who have already had COVID-19, we are still requiring that they be vaccinated and recommend they talk to a doctor about when it is best to do so,” Daniel Telles, assistant director of media relations at the University of San Diego, told The Epoch Times in an email. “Even if members of our university community have already recovered from COVID-19, it is possible—although rare—that they could again be infected with the virus that causes COVID-19.”

“As the CDC suggests, data from clinical trials indicate that COVID-19 vaccines can be given safely to people with evidence of a prior SARS-CoV-2 infection. Therefore, Wesleyan University will require all students, even those who have tested positive for COVID-19, or who have had positive COVID-19 antibodies, to be vaccinated in order to enroll in fall semester classes,” Olivia Drake, the campus news editor for Wesleyan University, told The Epoch Times in an email.

According to a study funded by the National Institutes of Health, 95 percent of the people with prior COVID-19 infections had durable immunity to the CCP virus lasting up to eight months.

Preliminary data on vaccines suggest they offer a similar level of protection and durability. Pfizer and Moderna are already developing booster shots because the efficacy of their vaccines drops over time. Pfizer says efficacy diminishes to 91 percent from 95 percent in six months. The efficacy of the Moderna vaccine drops to 90 percent after six months, according to the company. Both vaccine makers foresee that an annual revaccination may be necessary.

Two Columbia University students who spoke to The Epoch Times on campus in New York took no issue with the school not providing an exemption for immune students. Both used similar reasoning to the CDC, saying that too much is still unknown about the virus.

“I think because there is so much that we don’t know there, it makes sense that that’s not enough for them,” said Courtney Treglia, a postgraduate student who plans to teach an in-person course in the fall.

“I think that’s a good thing to Columbia because we just don’t know all of the science behind it and at some point, the antibodies do go away, so it’s a good thing, generally,” said a male student, who asked to remain anonymous.

Some schools, including California State University, University of Northern Colorado, and the Southwestern Community College District, are still finalizing their vaccination policies and say they haven’t yet made a decision on how to treat students who request an exemption based on acquired immunity. Despite the discussions, the vaccine mandates on their websites don’t advise students that such exemptions are being considered and could become available.

Fort Lewis College, one of the few schools that spoke on the record about their approach to students with infection-conferred immunity, referenced guidance by the CDC, which states that reinfection is rare in the 90 days after the initial CCP virus infection but cautions that “the risk of severe illness and death from COVID-19 far outweighs any benefits of natural immunity.”

The statement notably conflates the risk from COVID-19 facing non-immune people with the protection from acquired immunity. The apparent intent of the statement is to warn people who may be considering becoming infected and acquiring immunity as an alternative to getting a vaccine.

The CDC didn’t immediately respond to a request by The Epoch Times for clarification.

“Just like scientists don’t know how severe the COVID-19 illness will be for each person, scientists don’t know how long natural immunity lasts for each person. We are following CDC guidelines which state that regardless of whether individuals have been sick with and recovered from COVID-19, vaccination is recommended,” Lauren Savage, a media relations strategist at Fort Lewis, told The Epoch Times.

“For FLC students, the benefits of the vaccine include protection from severe illness and death, as well as the opportunity to get back to a normal college experience.”

In addition to lasting protection, acquired immunity to the CCP virus is effective against its variants, according to an NIH-funded study led by Dr. Anthony Fauci and published in late March. The immune system cells in people with acquired immunity “could recognize virtually all mutations in the variants studied” and “should offer protection against emerging variants.”

Another NIH-funded study, which hasn’t yet been peer-reviewed, found that COVID-19 patients had “broad-based immune memory response” eight months after being infected.

“Naturally acquired immunity is superior to anything this vaccine could deliver. So, any students who have been through infection and COVID-19 should be exempt from vaccination,” H.C. Tenenbaum, professor of laboratory medicine and pathobiology at the University of Toronto, told The Epoch Times.

“There’s a vast array of evidence in the scientific literature that shows definitively that if you’ve had COVID and recovered, the vast, vast majority of people have a durable immunity that it’s very unlikely that you’ll be reinfected and you’ll be protected from reinfection,” Jay Battacharya, a professor of medicine at Stanford University, said during a roundtable discussion with Florida Gov. Ron DeSantis in March.

“Even if you do get reinfected at some later time, it’s very likely to be less severe than the first time. So, yeah, it’s just like the other coronaviruses; if you get infected, you get immunity and it lasts a while. Not forever, but it lasts a while.”

During the same roundtable, Sunetra Gupta, an infectious disease epidemiologist and a professor of theoretical epidemiology at the Department of Zoology at the University of Oxford, noted the curious way in which some public health experts cling to the notion that it’s unknown whether there would be durable acquired immunity after an infection from the CCP virus.

“What do the scientists do under those circumstances? They look around to other viruses, and we had four others circulating, we still do, coronaviruses, to which we knew from the studies that had already been done, that you do get immunity in a very similar manner,” Gupta said. “You make antibodies … and that those do protect you, particularly from severe disease and death, forever. They don’t protect against reinfection, but they protect you against severe disease and death.”

Regardless of how long acquired immunity is shown to last, the NIH-funded studies suggest that students with acquired immunity who prefer to wait and see when it comes to getting vaccinated have the level of immune protection needed to do so.

One in four young adults ages 18 to 29 wants to “wait and see” before taking the COVID-19 vaccine, according to a survey by the Kaiser Family Foundation. The data suggests that as many as 600,000 students could be forced to make a vaccination choice before this fall against their current preference and, if they have immunity, with no proven benefit to themselves or those around them.

To date, the risk of adverse negative effects from vaccines remains extremely low. The CDC’s Vaccine Adverse Event Reporting System (VAERS) has logged 4,178 deaths following a COVID-19 vaccination, although a review of the cases hasn’t established a causal relationship with vaccines. There have been 15 cases of severe blood clots which are believed to have been caused by the Johnson and Johnson vaccine.