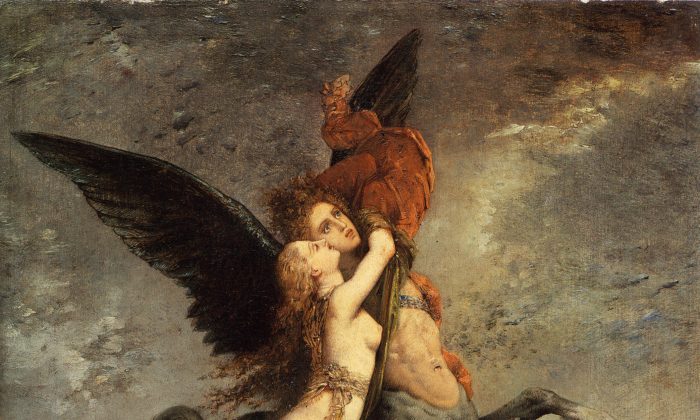 19th Century Painting in France: An Introduction to the Academies

It is impossible to look at French art in the nineteenth century without examining what is known as the Institut Nationale des Sciences et des Arts, referred to simply as the Institut (Institute), and with it the Academy des Beaux Arts.

The Institute was an exclusive body of experts that administered the national affairs of the sciences and the arts. It consisted of five constituent Academies of which the Academy des Beaux Arts, which oversaw developments in, not only painting, but sculpture, architecture and music, was only one of the five. There were 40 members that oversaw the administrative duties of the Academy des Beaux Arts, 14 spots of which were allocated to painters:

“Each new member was appointed by the votes of existing members and approved by the government. Membership was normally for life and appointment to the Academy comprised the highest public honor available specifically to artists. Its influence upon exhibitions, teaching and recognition was far-reaching…the fourteen painters of the institute represented, in terms of professional activity, the top of the tree,” according to John Milner’s book, “The Studios of Paris.”

Although some of the structure and policies changed from the time the Academy des Beaux Arts (administrative section) and the Ecole des Beaux Arts (actual school) were founded in 1648, from 1819 through 1863, the Academy both appointed professors to the school and also awarded the winners of the Prix de Rome, though Napoleon III gave out the medals of the Paris Salon. The Prix de Rome, awarded to one person each year, was the most prestigious and sought after award by young artists. The prize, depending what year it was awarded in, granted the winner between two and five years of study in Rome and a reputation that guaranteed a successful career.

The structure remained this way until March 13, 1863, when the superintendent of the fine arts at the time, Count Alfred-Emilien de Nieuwerkerke, transferred much of the control of the Ecole des Beaux Arts to the imperial government, namely Napoleon III, who issued another decree on Nov. 13 of the same year creating a Conseil d’Enseignement (Board of Education). This Conseil d’Enseignement took over the responsibilities of naming professors to the Ecole des Beaux Arts as well as selecting the 37 jurors who would decide the winner of the Prix de Rome.

This was the third attempt the government had made to take much of the power of the school away from the Academy, but just as the other attempts had failed, so too in 1874 a method was introduced so that the Institute artists could again award prizes and diplomas.

As more turmoil ensued, 1878 the power of who got to show in the Paris Salon was turned over to the Société des Artistes Français where artists, not the government or its constituents, selected the pieces to be shown in the Salon from 1881 onward. This constant change in administrative powers stemmed from a discontent with monarchal like authority that started in the years leading up to the French Revolution.

This mindset continued even after the Société des Artistes Français was formed, as again there were those unhappy with the artists who held the authority in the Société des Artistes Français. The argument can be made that this continual progression against authority, at least in part, led to the rebellion against the academic way of teaching and the Paris Salons altogether, eventually initiating the rise of modernist ideology.