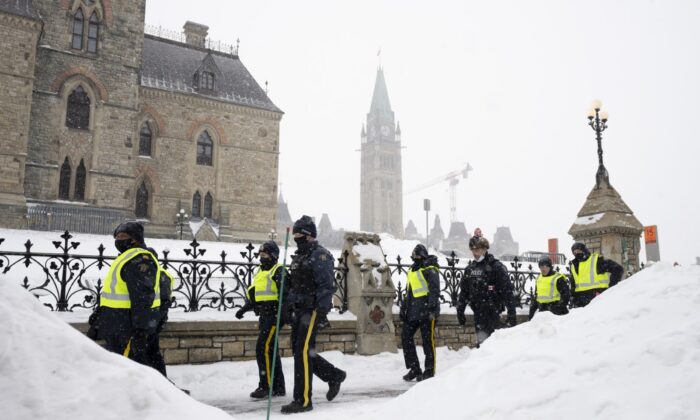 OTTAWA—Ottawa police said on the Feb. 20 that 191 people have been arrested and 79 vehicles towed as law enforcement continues operations to clear protesters opposed to COVID-19 mandates from the nation’s capital.

Many protesters were pushed back by officers in riot gear with batons and pepper spray on Feb. 19, with demonstrators seen trying to wash the spray out of their eyes.

The day before, mounted police advanced on protesters, in some cases knocking down some people. Ottawa Police Service (OPS) said on Feb. 20 that the civilian law enforcement agency Special Investigations Unit has launched an investigation into the issue after a 49-year-old woman was reported to have serious injury following the incident.

The OPS said on Feb. 20 that among the 191 people arrested, 103 have been charged, mostly for mischief and obstruction.

Police have designated the site of the protest in Ottawa’s downtown core as a secured area. Checkpoints have been set up to only allow access to those who live or work in the area.

Police officers have also set up fences to keep protesters away from areas already cleared by law enforcement, further restricting the protest site.

Police began escalating operations against the protesters on Feb. 18, following the federal government’s invocation of the Emergencies Act.

“I have been watching the situation in our nation’s capital with dismay. It is difficult to watch. There is a deep sadness that things came to this,” said Newfoundland and Labrador Premier Andrew Furey on Twitter on Feb. 19. “But I am confident calm will follow, Canada will be stronger, and any wounds will heal.”

Furey was among the minority of premiers who supported the use of the Emergencies Act to deal with the ongoing protests against COVID-19 mandates. The premiers of Alberta, Saskatchewan, Manitoba, Quebec, New Brunswick, Prince Edward Island, and Nova Scotia said there is no need for the measure.

The act is currently being debated in the House of Commons, with the NDP backing up the Liberal government’s position in invoking the act, and the Conservatives and the Block Quebecois opposed.

The act gives the federal government sweeping powers to confront the protesters, including imposing financial sanctions.

Public Safety Minister Marco Mendicino said on Feb. 19 that at least 76 bank accounts have been frozen in relation to the ongoing protests.

“The operationalization of the measures under the Emergencies Act is something that is being undertaken by police in conjunction with financial institutional partners including the banks,” Mendicino said at a press conference.

The ongoing demonstrations against COVID-19 mandates and restrictions were inspired by a protest originally initiated by truck drivers opposed to the federal government’s requirement that truckers crossing the U.S.-Canada border must be vaccinated for COVID-19.

As large convoys of trucks and other vehicles drove to Ottawa to protest the vaccine mandate for truckers, more people who are opposed to the various COVID-19 mandates and restrictions joined the movement.

Limin Zhou
Limin Zhou is a reporter based in Ottawa.