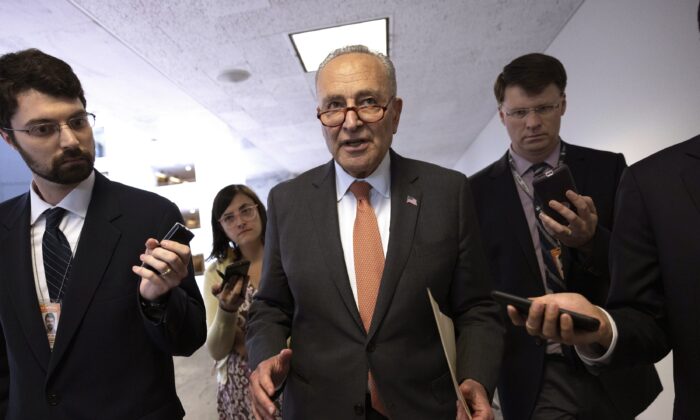 The Senate on Tuesday morning passed the $1.2 trillion White House-backed infrastructure bill after weeks of debate, although it’s not clear whether the bill will advance in the Democrat-controlled House.

The measure, called the Infrastructure Investment and Jobs Act, was hashed out by a bipartisan group of senators and President Joe Biden’s administration. The bill, which passed 69-30, will include $550 billion in new federal spending over five years.

“It has taken quite a long time, and there have been detours and everything else, but this will do a whole lot of good for America, and the Senate can be proud it has passed this,” Senate Majority Leader Chuck Schumer (D-N.Y.) said about the bill.

While some have described the bill as “bipartisan,” several prominent Republicans have vocally opposed it and claimed it would hand a victory to Democrats in Congress ahead of a fraught 2022 midterm election season. Former President Donald Trump again pilloried Senate Minority Leader Mitch McConnell (R-Ky.), who voted in favor of the measure, for giving the bill his blessing while publicly questioning the Kentucky Republican’s leadership capacity.

“He is working so hard to give Biden a victory, now they’ll go for the big one, including the biggest tax increases in the history of our Country,” Trump said in a statement on Tuesday right before senators moved to vote on the bill.

Republicans who supported the infrastructure bill or helped negotiated its passage have said that it is essential to show the GOP can find consensus in passing bipartisan legislation instead of being merely an opposition party.

Others, like Sen. Ted Cruz (R-Texas) and Cynthia Lummis (R-Wyo.), said a provision in the bill would add more regulations on cryptocurrency, potentially destroying the industry.

In a recent speech, Cruz said that “there aren’t five senators in this body with any real understanding of how cryptocurrency operates. We have had no hearings on this. And yet, this body is prepared to obliterate an industry willy-nilly.”

Biden and Democrats also proposed a $3.5 trillion spending package and vowed to pass it via budget reconciliation, which requires a mere 51 votes. On Monday, Democrats unveiled the giant spending measure, although it’s not clear whether some of the provisions will be approved by the Senate Parliamentarian’s office or will have enough centrist Democrats to support it.

In recent comments to the media, House Speaker Nancy Pelosi (D-Calif.) suggested that the $1.2 trillion infrastructure package wouldn’t be taken up in the House unless the Senate can pass the $3.5 trillion bill—dubbed as “human infrastructure” in tandem.

During his floor speech on Tuesday, Schumer said that after the infrastructure vote, the chamber will work on the massive spending measure.

“I am confident the Senate will take the first major step towards achieving our second goal,” he said.

A summary of the bill released by Schumer’s office on Monday suggests the $3.5 trillion bill will include free community college tuition, money to create a so-called civilian climate corps to put young Americans to work, an expansion of Obamacare, universal pre-kindergarten for 3- and 4-year-old children, long-term care for older adults, Medicare expansions, money for homeowners to retrofit their properties to fall in line with climate regulations, and much more.

The bill also includes provisions around illegal immigration. Sen. Bernie Sanders (I-Vt.), the head of the Senate Budget Committee, said it would provide a “pathway to citizenship” for “undocumented people,” without elaborating, according to a separate statement released by his office on Monday.

Republicans, including McConnell, have sharply criticized the larger bill and Democrats’ proposed tactic of using reconciliation without any GOP support.

In remarks Monday, McConnell said that if Democrats try to pass the measure via reconciliation with no bipartisan support, the GOP won’t back a plan to raise the U.S. debt ceiling.