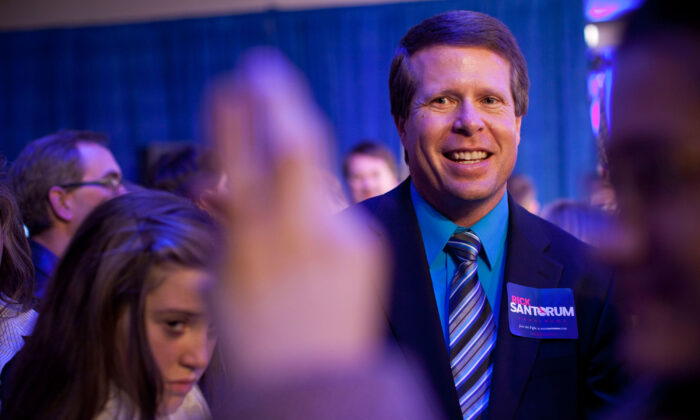 SPRINGDALE, Ark.—Jim Bob Duggar, whose large family was featured in the TLC reality show “19 Kids and Counting,” has announced he’s running for a seat in the Arkansas Senate.

Duggar, who previously served in the Arkansas House, announced Friday on the family’s Facebook page that he’s running for the district in northwest Arkansas that includes Springdale.

Last week, Republican state Sen. Lance Eads resigned the seat to take a job in the private sector. A special election will be called to fill the term.

TLC pulled “19 Kids and Counting” in 2015 over revelations that Duggar’s son, Josh, had molested four of his sisters and a babysitter. His parents said he confessed to the fondling and apologized. Josh Duggar has also apologized for his pornography addiction and for cheating on his wife.

Josh Duggar is set to go to trial in federal court in November on two counts of downloading and possessing child pornography. He faces up to 20 years in prison and fines of up to $250,000 on each count if convicted.

A longtime family spokesman, Chad Gallagher, told the Arkansas Democrat-Gazette that no family “is immune from tragedy, heartbreak or impact from the decisions of the ones they love.”

He added that it’s “important to note that Josh is a grown adult.”

Jim Bob Duggar, who was born and raised in Springdale, and his wife Michelle have 20 children and 22 grandchildren.

“Now more than ever, we need a bold voice that is pro-family, pro-business, pro-gun and pro-life,” Duggar said in the announcement. “It’s time for conservatives to demand courageous leadership that puts Arkansas families, jobs, and our constitutional liberties first.”

This is Duggar’s second run for the district. In 2006, he was defeated in the Republican primary.