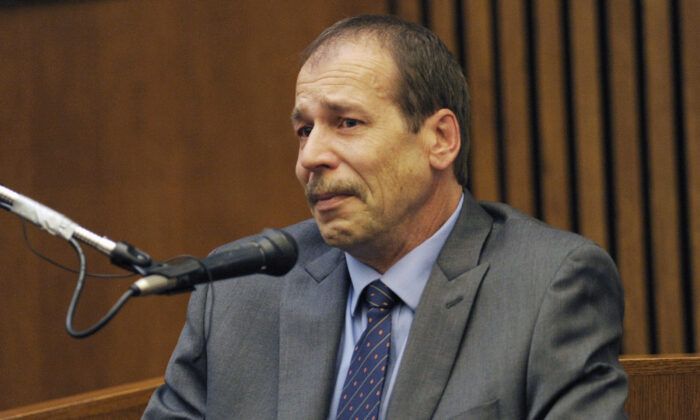 Ted Wafer, of Dearborn Heights, Mich., testifies in his own defense during his second degree murder trial in Detroit on Aug. 4, 2014. (Clarence Tabb Jr./Detroit News via AP)
US News

17-Year Sentence Sticks for Man Who Killed Woman on Porch

DETROIT—A Detroit-area man who said he feared for his life when he fatally shot a young woman on his porch in 2013 was given the same 17-year prison sentence Wednesday at a new hearing ordered by the Michigan Supreme Court.

Ted Wafer was convicted of second-degree murder and involuntary manslaughter in the death of Renisha McBride in Dearborn Heights.

But about halfway through Wafer’s prison term, the Supreme Court in February unanimously threw out the manslaughter conviction, saying he couldn’t be punished twice for the same homicide.

Wayne County Judge Dana Hathaway said the prison sentence won’t change: 15 years for second-degree murder, plus two years for using a gun during a crime, which Wafer has already served. She noted that the murder sentence still was within the scoring guidelines.

Wafer, 63, gets credit for roughly eight years in custody, making him eligible for parole in 2031.

Wafer has been a “model prisoner” but the “facts remain the same,” the judge said.

“You cannot murder someone for simply knocking on your door in the middle of the night. You had choices,” Hathaway said.

Wafer opened his front door and shot McBride, 19, through a screen door before dawn. He said he was awakened by pounding and feared for his life, though he didn’t call police first. A jury rejected his self-defense claim.

Prosecutors speculated that McBride, who was drunk and had crashed her car hours earlier, might have been confused when she arrived on Wafer’s porch.

“Holidays are no longer holidays because we have no joy,” McBride’s mother, Monica McBride, said in court. “Every day is a living nightmare that we can’t and won’t wake up from.”