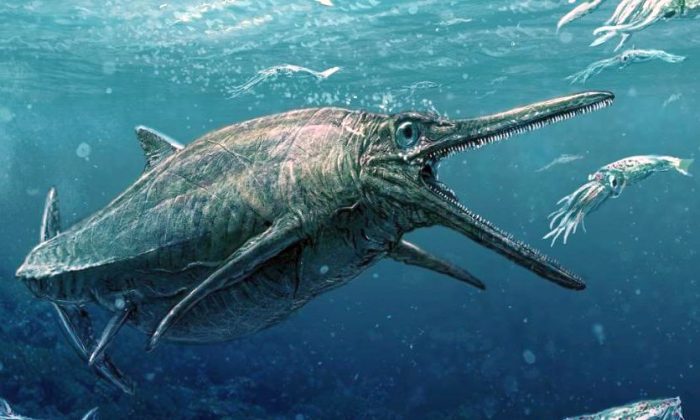 Scientists have discovered a 13-foot-long reptile that swam through the seas about 170 million years ago in Scotland.

The fossil, called the Storr Lochs Monster, is the most complete skeleton of a family of animals called ichthyosaurs. It was unveiled in Edinburgh this week, the BBC reported. The fossil was found in 1966.

The ancient creatures grew to around 13 feet in length with long, pointed heads. They had hundreds of teeth, which they apparently used for squid and fish.

The Telegraph reported that the University of Edinburgh and energy company SSE enabled the fossil to be extracted from a rock in which it was encased, after being in storage for 50 years.

“Their bones are exceptionally rare in Scotland, which makes this specimen one of the crown jewels of Scottish fossils,” Dr. Steve Brusatte, from the University of Edinburgh’s School of GeoSciences, told the newspaper. “It’s all thanks to the keen eye of an amateur collector that this remarkable fossil was ever found in the first place, which goes to show that you don’t need an advanced degree to make huge scientific discoveries.”

“Although some people think that sea monsters live here today in our lakes, there were actually real ones that lived here over a hundred million years ago,” he told National Geographic.

The fossil was discovered on a beach near the SSE Storrs Loch power station by a facility manager, Norrie Gillies.

Martin Pibworth, managing director of wholesale SSE, told the Telegraph: “The fossil was found 50 years ago by Norrie Gillies who, like his son Allan, are both proud SSE company men and were determined it should receive the public attention it deserves.”