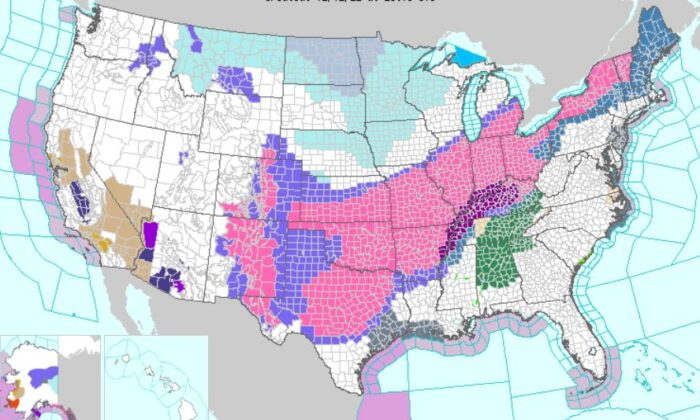 Winter storm warnings and advisories were in place across hundreds of counties, spanning at least a dozen states, according to a map provided by the Weather Service on Feb. 2, 2022. (National Weather Service)
US News

Well over 1,000 U.S. flights were canceled on Wednesday as a significant winter storm crosses the country, bringing ice and snow, as several states declared an emergency to prepare for the weather system.

Flight tracker FlightAware.com shows that about 1,489 flights into or out of the United States were canceled as of Wednesday morning—a number that is sure to rise as the storm continues to move east. Another 118 were delayed, the site shows.

SouthWest led the nation in cancelations on Wednesday with at least 402, according to FlightAware. American Airlines saw 164 cancellations, Spring Airlines reported 116, and United Airlines has 81, the website shows. Outside the United States, China Eastern reported 335 cancelations.

“Around the country, we’re planning to operate a limited or reduced schedule from some cities in the path of the storm but will make adjustments to the schedule as needed,” Southwest spokesman Dan Landson told The Associated Press.

Forecasters with the National Weather Service say that “a large-scale and massive winter storm will impact the Central, Eastern and Southern U.S. over the next 2 to 3 days.”

“Heavy snow is expected from the southern Rockies to northern New England, while heavy ice accretion is likely from Texas to Pennsylvania,” according to the federal service in a Wednesday morning update. “Meanwhile in the warm sector, heavy rain and flooding are possible in the South and severe thunderstorms near the central Gulf Coast region.”

Winter storm warnings and advisories were in place across hundreds of counties, spanning at least a dozen states, according to a map provided by the Weather Service.

Parts of Michigan, for example, are expected to see more than a foot of snow this week, officials told AP.

“It will be a very messy system and will make travel very difficult,” Marty Rausch, a meteorologist with the National Weather Service, told the outlet.

Missouri Gov. Mike Parson and Oklahoma Gov. Kevin Stitt both declared states of emergency over the storm, requiring schools and colleges to shift to online teaching.

“Severe winter weather isn’t something we are strangers to,” Parson wrote in a statement. “But we must be prepared for the worst.”

And Stitt’s office said that the “storm is expected to include a mix of freezing rain, sleet, snow, strong wind gusts, and low temperatures across the state beginning Wednesday, which may result in power outages and hazardous road conditions.”