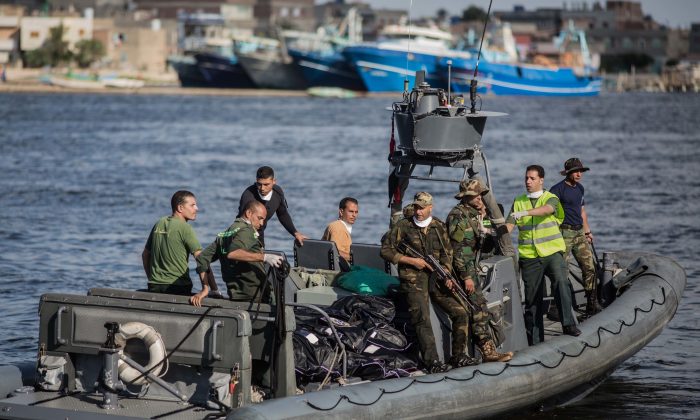 An Egyptian coast guard dinghy brings bodies from a Europe-bound boat that capsized off Egypt’s Mediterranean coast, to the shore in Rosetta, Egypt on Sept. 22, 2016. (AP Photo/Eman Helal)
International

ROSETTA, Egypt—The bodies of 162 people had been pulled from the waters off the Egyptian coast by Friday, two days after a boat carrying hundreds of migrants capsized in the Mediterranean while attempting to head to Europe.

Dozens more are feared dead, said Mohammed Sultan, the governor of Beheira, who provided The Associated Press with the latest death toll. He also said that the search operation is still ongoing. Many of them are believed to be children and women who were unable to swim away when the boat sank.

Wahdan el-Sayyed, the spokesman of the Nile Delta province of Beheira, provided the latest figures and told The Associated Press that the search operation was ongoing.

An AP reporter near the Nile Delta city of Rosetta saw between 20 to 30 bodies brought in by fishing boats early Friday morning and delivered to a group of waiting ambulances at the coast guard pier. Pictures posted on social networking sites showed dozens of bodies lined up in black plastic bags, and others floating near wooden fishing boats. Videos showed that some fishermen were using nets to bring up the bodies.

In one video, a fisherman was heard shouting into his mobile phone that, “the sea is littered with bodies.”

Many of those gathered at the shore where the bodies arrived appeared to be wearing surgical masks to protect them from the smell of decaying bodies. Some brought chunks of ice to be placed on the bodies to prevent them from decomposing.

Authorities have struggled to give accurate figures for the number of people on board the capsized vessel. The boat was located nearly 12 kilometers (7.5 miles) from the Nile Delta port city of Rosetta when it sank. It had waited at sea for many hours—perhaps days—for smaller wooden boats carrying migrants to arrive from different points along the Egyptian coastline.

Survivors said that overcrowding caused the boat to capsize.

The head of the local council in the area, Ali Abdel-Sattar, said that the currents have carried the bodies of the victims many kilometers away from the site of the sinking. “Today, four bodies, including two Egyptian children, were found 20 kilometers to the east,” he told the AP.

He added that many of the migrants are believed to have been “stored in the bottom of the boat, in the fridge.”

“Those are the ones who drowned first, most probably stuck, and their bodies might not be retrieved anytime soon,” he said, adding, “those we found are the ones liberated from the boat. I believe many are stuck and now laying in the bottom of the sea.” He said the boat may now have sunk to 16 meters (yards) below sea level.

The U.N. Refugee Agency, UNHCR, estimated that the boat was packed with some 450 people, while the state news agency MENA said earlier that the number might be as high as 600.

Egyptian officials said that over 160 people were rescued and that the majority are Egyptians, while the others are Sudanese and other nationalities, including Somalians and Eritreans.

The EU border agency, Frontex, recently said more than 12,000 migrants arrived in Italy from Egypt between January and September this year, compared to 7,000 in the same period last year. Yet UNHCR says that since 2014 there has been a steady increase in the number of people intercepted while trying to leave Egypt, with 4,600 people arrested this year, a 28-percent increase compared to the previous year.

On Thursday, four people described as members of the vessel’s crew were arrested over charges of human trafficking and manslaughter.

At a small pier called el-Borg, hundreds of families had gathered Friday, hoping to identify the bodies of their loved ones. Women screamed and relatives pushed and shoved while swarming the ambulances heading to the hospital.

Fishermen said that they had difficulty collecting the badly decomposed bodies, with one saying, “we didn’t know how to pull them out.” The intense smell of decay filled the air and many covered their faces with masks.

Survivors and relatives told the AP earlier that the boat sank around 5:30 a.m. on Wednesday, and that it took coast guards around six hours to come to the rescue. Fishing boats in the vicinity were the first to provide help.

Many of the survivors were briefly detained by police. Some of those rescued were taken to hospitals, where they lay handcuffed to beds and under police guard.

The Egyptian news portal, Al-Youm al-Sabei, published interviews with several survivors who said that before their journey the migrants had been “stored” for several days in chicken farms by the traffickers to evade police. Some of the interviewees said the traffickers asked for $6250 per family, to be given on arrival in Italy.

After his release, survivor Ahmed Darwish said, “my advice is that no one should undertake this risk, and especially anyone who saw these things, they will never do it again.”

The International Organization for Migration has said that this year over 3,500 have died while attempting to cross the Mediterranean to Europe, with this number “rapidly approaching” the record death toll set last year.

Those who chose to risk the dangerous journey are often fleeing war and poverty in the Middle East and elsewhere.