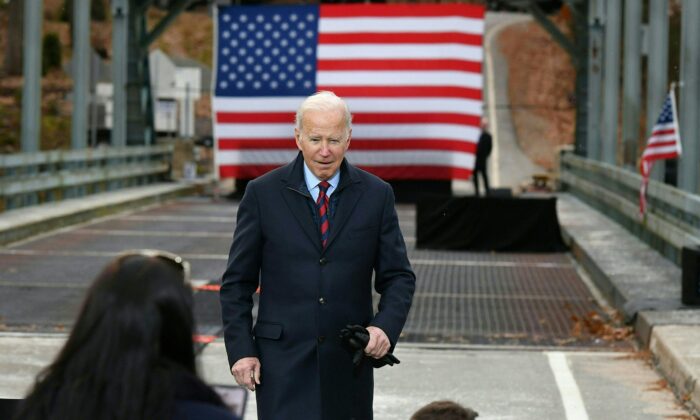 President Joe Biden greets guests after speaking on infrastructure at the NH 175 bridge over the Pemigewasset River in Woodstock, N.H., on Nov. 16, 2021. (Mandel Ngan/AFP via Getty Images)
Federal-State Relations

One suit, filed by 12 attorneys general in federal court in Shreveport, Louisiana, asserts the administration violated federal law by requiring approximately 17 million healthcare workers to get a jab.

The powers given to the health secretary do not extend to mandating vaccines, Montana Attorney General Austin Knudsen and the 11 other Republicans said.

They also took issue with the Centers for Medicare & Medicaid Services (CMS) waiving the notice and comment period required by the Administrative Procedure Act and Social Security Act before a rule takes effect.

CMS said in its rule that data shows “the vital importance of vaccination” and that officials determined they could not delay in imposing the mandate.

In the same document, the agency said “the duration of vaccine effectiveness in preventing COVID-19, reducing disease severity, reducing the risk of death, and the effectiveness of the vaccine to prevent disease transmission by those vaccinated are not currently known.”

Studies have shown all markers of vaccine effectiveness decline over time, especially protection against infection.

The mandate threatens to exacerbate shortages in healthcare staffing and harm patients, which should have triggered a regulatory impact analysis, the attorneys general argue.

CMS said in the rule that it could not predict the outcome of the mandate, which affects facilities that receive Medicare or Medicaid funding, if it remains in place.

“If only one health care provider in an area required staff vaccination, then those who refuse vaccination could quit and obtain employment at another location in the same field or type of position. But with many employers already mandating vaccination, and with nearly all local (and distant) health care employers requiring vaccination under this rule, we expect that such effects will be minimized (with exceptions for medical or other exemptions as required by law),” the agency stated.

“That said, currently there are endemic staff shortages for almost all categories of employees at almost all kinds of health care providers and supplier and these may be made worse if any substantial number of unvaccinated employees leave health care employment altogether.”

The police power of compulsory vaccination has always been the province of and still belongs to states, Paxton argued, urging the court to set aside the mandate as unconstitutional.

“At a time when we need healthcare workers more than ever before, amid a harrowing worker shortage, the Biden Administration has prioritized this unlawful vaccine mandate over the healthcare of all Americans,” Paxton said in a statement.

Biden administration officials have expressed confidence in the mandate and others like it ultimately prevailing against legal challenges.

A CMS spokesperson told The Epoch Times in an email that they could not comment on pending litigation.

“There is no question that staff in any health care setting who remain unvaccinated pose both direct and indirect threats to patient safety and population health,” the spokesperson added. “That is why it is imperative for health care providers to ensure their staff who may interact with patients are vaccinated against COVID-19.”

A 10-state coalition last week filed a lawsuit against the CMS mandate. The attorneys general outlined similar arguments in asking a court to intervene.

The deadline for the vaccinations is Jan. 4, 2022. There is no testing opt-out, unlike the mandate on private employers that is currently blocked by the courts.