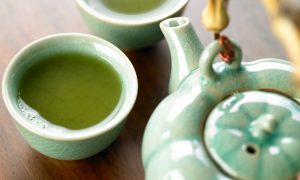 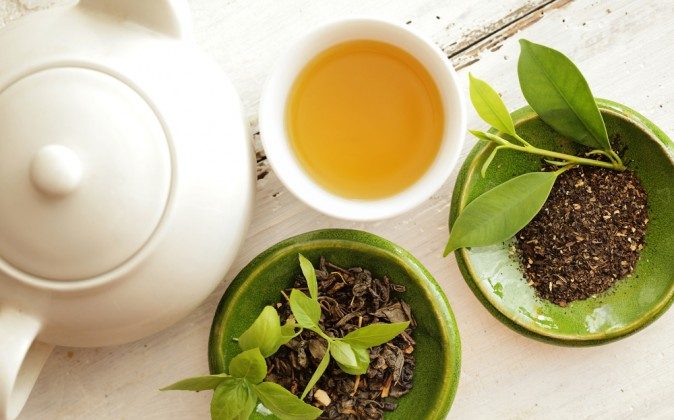 Green tea really is a superfood extraordinaire.  Thanks to a potent plant nutrient called epigallocatechin gallate, or EGCG, green tea is proving that food (or beverage, in this case) really is the best medicine.  I wrote an article a few years ago about the benefits of green tea but plenty of exciting hot-off-the-press research means there are more reasons than ever to start drinking green tea. Here are 13 reasons to start drinking greet tea today or to keep drinking it if you’re already hooked:

1.  It prevents cholesterol build-up in arteries and helps prevent cardiovascular disease.  According to research released earlier this month in the Journal of Biological Chemistry, EGCG helps prevent fat buildup in the arteries.

2.  In another new study published in the Journal of Applied Oral Science, scientists tested the effects of EGCG against bacteria found in the mouth called Streptococcus mutans and found it to be effective. The former used EGCG in dental materials but drinking green tea should have similar inhibitory effects. Other research in the Archives of Oral Biology confirms the antibacterial effect on harmful dental bacteria.

4.  It helps to protect the skin against UV damage, according to new research in the journal Pharmaceutical Development and Technology.

5.  Green tea is an overall fat buster extraordinaire. EGCG increases the rate at which fat is burned in your body.

6.  It burns up belly fat. Research at Tufts University indicates that EGCG in green tea, like other catechins, activate fat-burning genes in the abdomen to speed weight loss by 77 percent.

7.  It keeps energy stable by balancing blood sugar levels. EGCG improves insulin use in the body to prevent blood sugar spikes and crashes that can result in fatigue, irritability, and cravings for unhealthy foods.

8.  Research shows it may be helpful against lung cancer. In an April 2010 study published in Cancer Prevention Research, EGCG was found to suppress lung cancer cell growth.

11.  It may prevent skin damage and wrinkling.  EGCG appears to be 200 times more powerful than vitamin E at destroying skin-damaging free radicals.  Free radicals react with healthy cells in the body, causing damage so lessening their numbers may help reduce wrinkling and other signs of aging.

13.  It tastes good. If you’re not wild about the flavor, try a few different kinds. Try it iced or hot. Add some of the natural herb stevia to sweeten it if you want a sweeter drink.  I wasn’t crazy about green tea the first few times I tried it, but now I love it with a fresh squeeze of lemon and a few drops of stevia over ice—voila! Green tea lemonade. Mmmmm. Even green tea haters love this drink.

How to Benefit from Green Tea

Add one or two teaspoons of green tea leaves to a cup of boiled water, preferably in a tea strainer. Let steep for five minutes. Pour over ice if you prefer a cold beverage. Most experts recommend three cups daily. And don’t worry, it contains a lot less caffeine than coffee or black

*Image of “tea” via Shutterstock