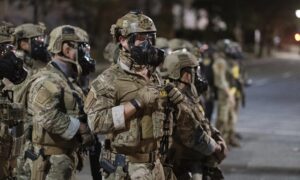 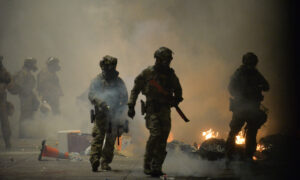 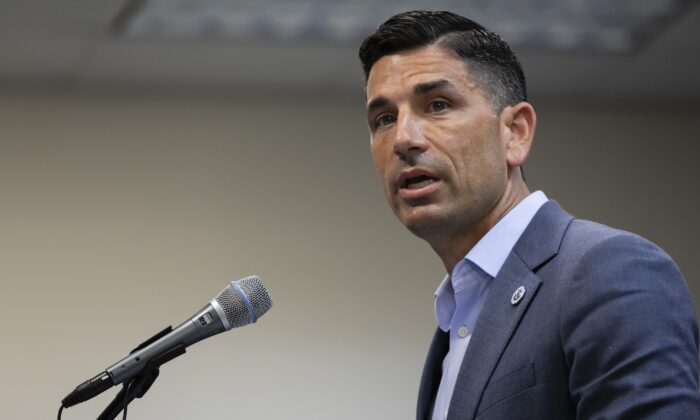 “It’s been 10 days since the agreement between DHS and Oregon. During that time, @PortlandPolice has declared riots or unlawful assemblies 12 times,” he wrote. “Rioting and arson are not actions of peaceful protesting.”

Portland has seen consecutive nights of protests, riots, and general unrest since the death of George Floyd in police custody in May.

On Monday night, at least nine people were arrested at a protest in Portland, and some officials accused them of attacking officers. They had gathered near the North Precinct building on Northeast Emerson Street on Monday night and Tuesday morning.

Police said in a statement that “dangerous objects [were] launched at officers” before they declared an unlawful assembly.

At around 8 p.m., demonstrators started marching before “exercising their free speech rights,” police said, adding that they then started blocking traffic.

“With shields at the front of the march, the group proceeded west on Northeast Killingsworth Street, ending at Portland Police North Precinct at 449 NE Emerson Street,” said the office, which added that agitators have previously tried to “storm this building and burn it down with people still inside.”

Authorities issued warnings via loudspeaker announcements and on social media not to take part in criminal activity such as vandalism, unlawful entry, or arson attempt.

“Some individuals in the crowd began shining bright strobe lights in the officers’ and troopers’ eyes, causing them pain. Officers had to move vehicles into position to light up the crowd and make it more difficult to target officers with lights. There were also items thrown at officers including eggs and water bottles,” said police.

Earlier this week, President Donald Trump suggested to Portland Mayor Ted Wheeler, a Democrat, to call in the National Guard to deal with the unrest while warning that Wheeler and Oregon Gov. Kate Brown, a Democrat, could be “held responsible.”

“Portland, which is out of control, should finally, after almost 3 months, bring in the National Guard. The Mayor and Governor are putting people’s lives at risk. They will be held responsible. The Guard is ready to act immediately. The Courthouse is secured by Homeland!” he wrote on Twitter.