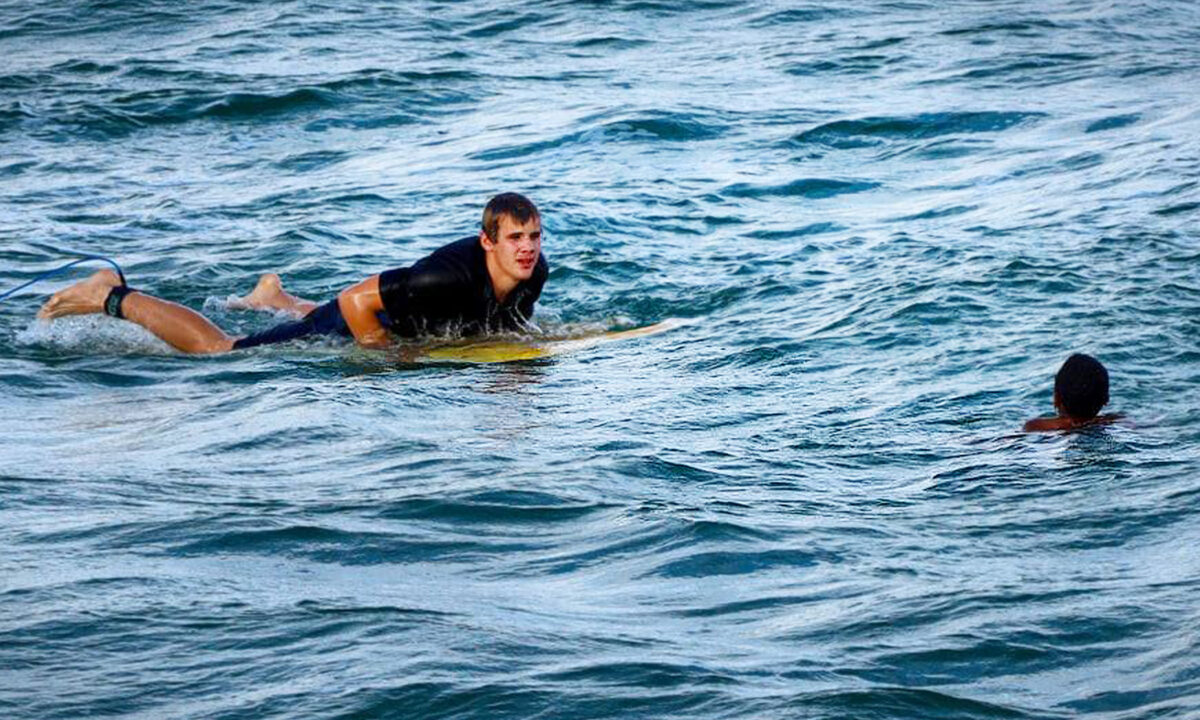 11-Year-Old Boy Caught in Riptide, Drowning, When Surfer Paddles to the Rescue, Saves His Life

While visiting Navarre Beach Fishing Pier with her husband, Bebe Booth, 52, had hoped to photograph sea turtles and dolphins. Instead, she caught a harrowing water rescue on camera when an 11-year-old boy got trapped in a rip current.

It was a normal Wednesday for the amateur wildlife photographer from Milton, Florida, June 30. She and her husband were just leaving the pier when she thought she saw a dolphin in the distance.

Upon zooming in with her camera, however, she saw a young boy struggling in the water.

“I realized that this was a child that was in big trouble trying to keep his head above the water as a rip current was taking him more out into the gulf very fast and powerful!” Booth told The Epoch Times.

The terrifying scene could have ended tragically.

“I was very scared because I know that a mom would have left without her son,” she said.

Then, Booth spotted amidst a group of surfers a young man paddling his way toward the boy—who was so far out, he had a ways to go.

Once the surfer reached the flagging boy, he calmly coaxed him onto the surfboard while talking to him to keep him calm, Booth recalled.

The child securely aboard, the surfer then paddled them directly out of the current to the safety of the shore.

Navarre Beach Fire Rescue arrived and tended to the boy; and the surfer walked off quietly without giving his name or making a fuss about what he’d done.

Impressed with his heroism, however, Booth was determined to find out his name.

“I talked to the fire department and asked if they knew who he was and told them I captured it on camera,” she said, but ultimately she relied on social media.

“We found out who he was!” she exclaimed.

“My first thought about sharing the pictures were that we needed to find this hero. He is so humble that he thought he was doing a normal thing.”

They learned his name, Benjamin Cross, and after reaching out, the fire rescue decided to recognize his actions by awarding him a certificate.

Benjamin’s mother, Andrea Cross, told ABC: “He is very grateful for all the love and support on social media the past couple of days and will receive a certificate and a T-shirt from the Navarre Beach Fire Department in recognition for his help with them yesterday. He also hopes that the boy and his family are doing well.”

There were no lifeguards on the beach at the time of the incident, and the flag was yellow, the station reported.

Booth offered a word of caution for beachgoers.

“If you would have seen how that rip current took this child, you would make sure you were wearing a life vest,” she said. “Even a very seasoned swimmer, they can be taken out so fast.”