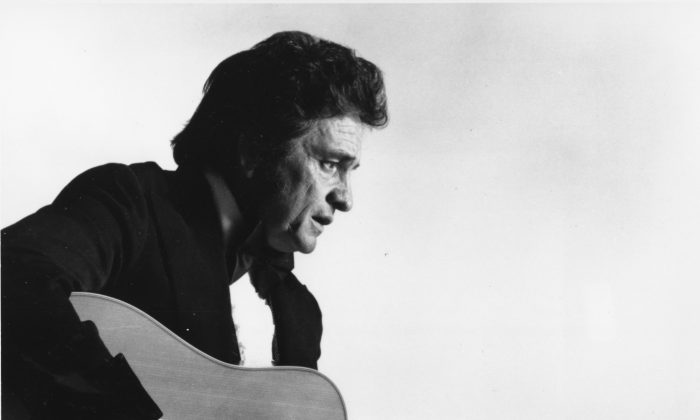 **FILE** This is a 1977 file photo of country western musician Johnny Cash. A concert marking the 40th anniversary of Cash's famous concert at Folsom State Prison scheduled for Sunday, Jan. 13, 2008, has been scraped, with the prison and the promoter blaming each other for the cancellation. (AP Photo, file)
Entertainment

The Talent is the Ability to Channel
By Mark Jackson

The best musical biopics result when the actor feels the role so powerfully, it goes beyond mimicry and gets into what’s commonly known as “channeling.” We know the word from seances, mediums, and the Oracle of Delphi and such, but the main thing is, when it happens, it’s slightly eerie.

It’s really a live theater phenomenon. It’s when the performance is so dead-on good, the hair stands up on the back of your neck because all traces of the actor completely disappear, and the historical character being played appears to reincarnate before your eyes onstage. The atmosphere during such channeling feels electrically charged; you can hear the proverbial pin drop.

In the movies, because of all the electronic and technical manipulation and the fact that there’s no living, breathing being onstage whose every move and breath is finely tuned and synced with the mood and breathing patterns of the audience—channeling translates less powerfully.

Still, there’s a bit of it going on in the excellent biopic “Straight Outta Compton,” with O’Shea Jackson Jr. playing O’Shea Sr. (aka Ice Cube). Of course, in this case, the physical genetic replication might have a little to do with it.

The following is a list of musical biopics, from worst to best (worst being a relative term, these are all top-notch performances) where we believe some channeling was happening.

The lately kinda interesting-looking actor Gary Busey got his start in movies (he was formerly a musician) because of his uncanny channeling of Buddy Holly in the 1978 biopic ‘The Buddy Holly Story.’

Richard Steven Valenzuela (Lou Diamond Phillips) is a Mexican kid who attains rock-and-roll superstardom under the stage name of Ritchie Valens. His half-brother Bob Morales (Esai Morales) is endlessly jealous of Ritchie’s success. After his hit “La Bamba” hits the top of the Billboard charts, he’s supposed to do a concert with Buddy Holly and “The Big Bopper.” They all fly through a snowstorm and their plane crashes and burns on Feb. 3, 1959. Don McLean called it “the day the music died” in his ’70s song, “American Pie.” The film put Lou Diamond Phillips on the map. For reasons of channeling.

British actor Eamonn Walker channels the lightning of American blues howler Howlin’ Wolf like a thundercloud, the raw sexuality of his performance coming from a such a primal place as to be almost disturbing. Beyoncé channels Etta James; she’s riveting. So much so that the performance may have been the reason the real Etta James threatened Beyoncé with bodily harm for having had the audacity to sing Etta’s 1961 signature song, “At Last,” at President Obama’s inauguration.

Loretta Lynn, one of country music’s biggest stars, picked Sissy Spacek to play her. Spacek wasn’t feeling it, but went ahead anyway. Lynn’s husband was played by Tommy Lee Jones—Lynn was only 13 when they married, and had four kids by the age of 20. Clearly, Lynn recognized that something in Spacek’s constitution recognized Lynn. Because there’s a Spacek best-acting Academy Award to prove Lynn’s gut feeling was accurate.

Speaking of channeling, Val Kilmer totally channels Jim Morrison in Oliver Stone’s biopic “The Doors,” so much so, that when The Doors band members themselves heard Kilmer’s singing, they couldn’t tell it wasn’t their former charismatic and disturbed lead singer. That’s talent.

Joaquin Phoenix channels Johnny Cash with a singing voice that’s very hard to tell apart from the original. And Reese Witherspoon channels Cash’s love interest (and later wife) June Carter. Might have done a better job than Joaquin. She did win the Oscar for it.

Without Tina Turner’s incandescent talent and charisma, along with her sexy backup singers, the Ikettes (one of whom dated Mick Jagger for a time), Ike Turner would have had a fairly low-wattage musical career. He was a talented show-businessman, but coming from his era, Ike did business as he learned it from his surroundings. He wasn’t so much a husband to Tina or a manager to the Ikettes, as a pimp to his whole musical venture (specifically the females involved in it), treating them like a kind of stable of musical prostitutes, with pimp-ish beatings meted out for rule infractions.

A live wire from start to finish, “What’s Love Got To Do With It?” provides the nostalgia of ’60s soul music and has terrific dramatic scenes. It features fully arresting performances from Laurence Fishburne as Ike, and an incredible Angela Bassett channeling Tina. The actual Tina Turner does the singing, but Bassett owns it by getting all the dance moves spot-on and committing to the portrayal of years of physical and emotional abuse.

If you ever wondered how the lately kinda interesting-looking actor Gary Busey got his start in movies (he was formerly a musician), it was because of his uncanny channeling of Buddy Holly in the 1978 biopic “The Buddy Holly Story.” And there’s no dubbing: Busey sang and played it all himself, sounding eerily like the real deal. Holly was a trailblazer, influencing everyone from the Beatles to Linda Rondstadt. Buddy Holly and the Crickets were the first white act at Harlem’s Apollo Theater—the Apollo booker thought Holly was black. You know the songs: “That’ll Be the Day.” “Peggy Sue.” “It’s So Easy.”

Who knew motor-mouthed Jamie Foxx was such a brilliant pianist? It’s part of what won him the role and then the Oscar, and then the Golden Globe, for a stellar channeling of legendary R&B singer-pianist Ray Charles. Director Taylor Hackford, who’d made one of the greatest musical documentaries of all time, “Hail! Hail! Rock ‘n’ Roll” (which could almost be thought of as a biopic with the notoriously cantankerous, miserly, charming, and hilarious Chuck Berry playing himself), clearly had his learning curve with “Hail” translate into an award-winning, actual biopic with “Ray.”

Jamie Foxx already had a handle on “Ray” through the piano playing, but it was his talent as a gifted stand-up comedian, and the penchant for mind-blowingly accurate mimicry that tends to accompany that profession, that synced with the piano playing and shifted the whole performance to the channeling level.

Chadwick Boseman, so good in the biopic about Jackie Robinson, soon after stepped up to the James Brown plate and absolutely knocked the role of the self-appointed “Godfather of Soul” out of the park. As I said in my review of the film: “Oh, he nails it. Top to bottom. Hair, talk, attitude, and jittery, shimmying, blurry-footed dance moves. Not even Jamie Foxx playing Ray Charles surpasses Boseman becoming Brown. Close, maybe. But if Jamie won an Oscar, so must Chadwick.” The word we’re looking for here is channeling. Read the full Epoch Times review here: http://bit.ly/1IXGT0N

It was an ABC miniseries, made two year after Elvis died, and was also the first collaboration between John Carpenter and Kurt Russell. People think it was Russell’s character “Snake Plissken,” with the eye-patch, the giant black cobra tattoo on his stomach, and his whispery, Eastwood-esque whispery delivery of the line “Call me Snake,” that announced Russell to the world as a Hollywood leading man. Which is true. But it was really during his earlier channeling of Elvis that Hollywood recognized his talent. Of these ten picks, this one may actually make the hair stand up on the back of your neck.

In the movies, channeling is just good acting. Onstage, it’s definitely something more. There have been actors, like Michael Chekhov (nephew of famous playwright Anton), who claim they felt or even saw some entity moving about the stage, and simply copied what they were experiencing. Either way, when it’s really good, you’ll know it when you see it.