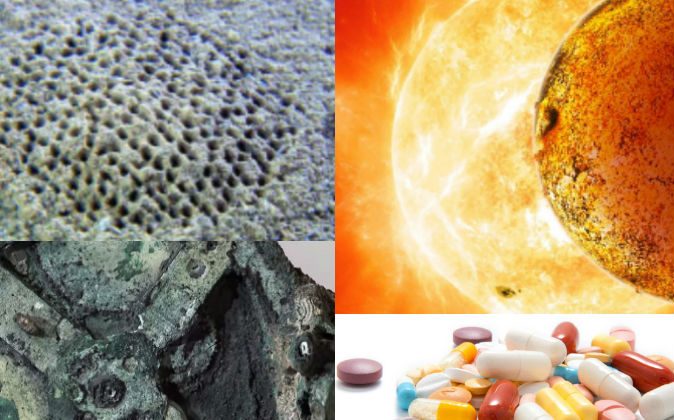 Top right: A burrow left by a creature scientists still have never been able to find. (Wikimedia Commons) Top right: Kepler 78b, a planet that stands up against heat in an unexpected way. (David A. Aguilar, CfA, via NASA) Bottom Left: Part of an ancient computer astoundingly complex for the period in which it was made. (Wikimedia Commons) Bottom right: Fake pills and other placebo treatments seem to actually heal, but exactly how the placebo effect works is as yet unknown. (Thinkstock)
Beyond Science

What’s causing the eerie noise detected deep under the Atlantic ocean? And who invented the mysterious computer discovered in an ancient Roman shipwreck? We don’t know, and neither do the scientists. Explore the ten most mysterious discoveries that have been baffling us for decades.

In Taos, N.M., 2 percent of the population report hearing an unexplained humming noise. Scientists have been unable to find the source since it was reported in the 1990s.

9. Cone-Shaped Monument in the Sea of Galilee

A strange, cone-shaped underwater monument was revealed by sonar in 2013. Weighing 60,000 tons, it may have been built more than 6,000 years ago and submerged by rising waters.

It has only been explored via sonar scanning and dredging. At least one artifact brought up by dredging has been dated to 7,500 B.C.
Dani Nadel, an archaeologist at the University of Haifa who is working with a team to study the discovery, told Fox News last May: “It’s very enigmatic, it’s very interesting, but the bottom line is we don’t know when it’s from, we don’t know what it’s connected to, we don’t know its function,” he said. “We only know it is there, it is huge, and it is unusual.”

It could cost hundreds of thousands of dollars to excavate the site, according to Fox News.

A clockwork computer from 150 B.C. calculates the movements of the planets. Discovered in 1901, it continues to baffle researchers. It is unknown who invented this wondrously advanced mechanism. It is of Greek design, though it was found in a Roman shipwreck.

A mysterious creature in the Atlantic creates perfectly hexagonal burrows. Scientists are searching for the creature. Its burrows have been found, but it has not been observed.

Images of burrows amd a cast of a burrow (bottom right) said to have been made by the creature Paleodictyon Nodosum, a creature scientists have never actually seen. (Wikimedia Commons)

Known as the Sea Beast of Cincinnati, this 7-foot fossil was uncovered in 2012. Scientists aren’t even sure whether it’s a plant or an animal. The fossil is 450 million years old, from a time when Cincinnati was under water.

A sound coming from under the Pacific ocean has mystified scientists since 1991. A New Scientist article states: “Earth’s oceans are full of noise: boats, whales, submarines and earth tremors all add to the aquatic cacophony … yet there’s still a handful of sounds that continue to baffle researchers. They are generally very low-frequency and must be speeded up to be audible. Some last just a few minutes, while others go on continuously for years at a time. Nobody knows for sure what causes these sounds, but suspicion has fallen on volcanoes, icebergs and even huge, undiscovered beasts.”

Placebo drugs have been shown to relieve pain and reduce symptoms of Parkinson’s. How our body heals simply through mind power is unknown.

ALSO SEE: Is Your Illness Real or Imagined?

A force pushes a patch of matter through the universe at breakneck speeds. Unexplained by known gravitational forces, the source may lie outside the observable universe.

This illustration compares Earth with Kepler-78b. (David A. Aguilar, CfA, via NASA)

A similar size and density to Earth, this lava-covered planet orbits its star every 8.5 hours. The heat should make it impossible for a planet to form so close to its star.

Unexplained fireballs appear from the Mekong River in Thailand every October. Some speculate the fireballs may be somehow produced by natural gases from the river bottom, though the theory has not been proven. Legend says river serpents breathe out the fire to call Buddha to return to Earth.