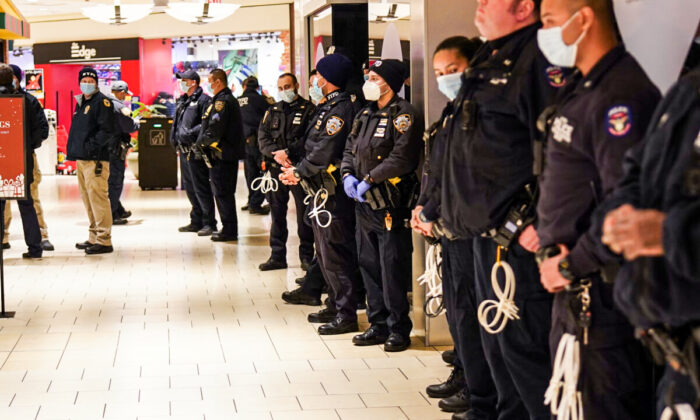 At least 10 people were arrested for sitting in two different restaurants in Queens, New York, without vaccination proof, and refusing to leave.

Police said that they were charged with criminal trespass after refusing “several lawful orders.”

On Aug. 17, New York City started requiring restaurants, gyms, and many other businesses to check guests and workers for proof of COVID-19 vaccination, as well as photo ID.

Not all NYC restaurants have complied with the mandate, some are against it.

Others don’t believe it’s their job to enforce it, but most bigger brands tend to comply.

Many have had their business severely affected.

On Dec. 14, a group of protestors went to The Cheesecake Factory in Queens, and the manager called the police after they didn’t show their vaccine passports.

They refused to leave and argued with the police that the mandates are unconstitutional.

Police ended up arresting six people at the restaurant.

“The events that took place at our Queens, NY restaurant on 12/14 were unfortunate,” Cheesecake Factory wrote in a statement on Dec. 15. “The health and safety of our staff members and guests is our top priority and we are complying with the local ordinance concerning COVID-19 vaccine requirements.”

The protestors released a flyer on the internet the next day, Dec. 15, indicating that they would go to The Cheesecake Factory again that night.

The restaurant closed that night, with at least 20 police officers and 5 police vehicles stationed outside of it.

The protestors instead went to a Shake Shack right across the street from The Cheesecake Factory.

They were served drinks while police and security only stood by at the counter, and the core group of protesters sat at the tables for a while.

Then they joined a bigger group of about 30 that protested with megaphones at the entry of The Cheesecake factory.

Gubernatorial candidate Derrick Gibson, a Republican and member of The Proud Boys, was there.

“This is a mandate, not a law, and they send the whole force out to protect Cheesecake Factory against people that are unvaccinated, they just simply want to eat a meal, that’s discrimination,” Gibson told The Epoch Times.

The group then walked around the block and entered an Applebee’s restaurant inside Queens Center Mall.

The same situation repeated itself: the manager called the police after the protesters didn’t show their COVID-19 vaccination proof. About 25 police officers, many with plastic handcuffs, asked them numerous times to leave. The protestors argued with them and then police pushed them out, arresting 4 in the process. One of the arrestees was a leader of the protesters, 30-year-old Josephine Valdez.

Mitchell Bosch was arrested for the second time in two nights. He was also one of the arrestees during the cheesecake “sit-in.”

Bosch is an army veteran who served in Iraq twice and also in Afghanistan.

“I’m all for the police. I back the blue, I believe in them. But all the issue is that they ended up telling us that it was criminal trespassing, which is a higher threshold than it is to just simply get charged with trespassing,” Bosch told The Epoch Times. “The police said ‘either you leave or we’re going to arrest you,’ and I decided to take a stand.”

He and the other demonstrators plan to keep protesting.

Benedict Arnold, a Vietnam War veteran, was arrested on Dec. 14, but not during the Applebee’s sit-in that he also participated in.

“We have [been] given desk appearance tickets for criminal trespassing, we were protesting Dr. Andrew Fauci’s edict and of the CDC and Mayor de Blasio’s recent commission of all private businesses, enforcing the edict from the city council and City Hall,” Arnold said.

“They say the government doesn’t trust us and they ask us not to trust each other. And this is when push comes to shove. And the campaign kickoff point is right here. Because this is blowback pushback, fight back, and the results you see are everywhere around you. And this is Exhibit A right here, from beginning to end.”

“I should have joined Black Lives Matter,” said one of the protestors who was kicked out of Applebees.