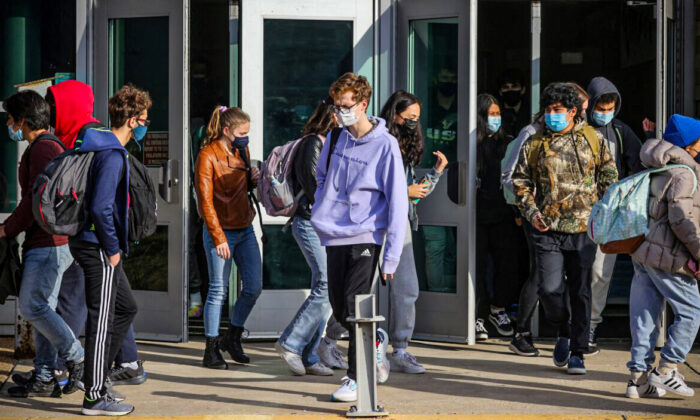 1 in 5 High Schoolers Considered Suicide During Pandemic, Over Half Suffered Emotional Abuse at Home: CDC Stats

A significant number of high school students in the United States experienced mental health issues during the COVID-19 pandemic, according to a survey, with many considering suicide, feeling a sense of hopelessness and insecurity, increasing addictions, and suffering from abuses.

The online Adolescent Behaviors and Experiences Survey (ABES) was conducted by the Centers for Disease Control and Prevention (CDC) from January to June 2021 and saw the participation of 7,998 students from 128 schools.

Overall, 37.1 percent of students experienced poor mental health during the pandemic period. In the 12 months prior to the survey, 44.2 percent of the participants said they felt persistent feelings of hopelessness and sadness. According to the survey, 19.9 percent seriously considered attempting suicide while 9 percent attempted it.

For students who had close relations at school, 28.4 percent reported poor mental health issues. Among students who did not feel close to people at school, this number was at 45.2 percent. Feelings of sadness or hopelessness and suicide attempts were also lower among students with close ties at school.

“School connectedness is a key to addressing youth adversities at all times—especially during times of severe disruptions,” Kathleen A. Ethier, director of the CDC’s Division of Adolescent and School Health, said in the agency’s press release.

“Students need our support now more than ever, whether by making sure that their schools are inclusive and safe or by providing opportunities to engage in their communities and be mentored by supportive adults.”

Kyla Chester-Hopkins, a high school junior in Milwaukee, spent much of 2020 stuck in her bedroom. Even after returning to school in the fall of that year, she found that most of her classmates were absent.

She feels the instability of her freshman and sophomore years is yet to end. “We’re growing up through a pandemic. And that’s definitely affecting our development,” Kyla said to The New York Times.

Since the pandemic began, 55 percent of students suffered emotional abuse at the hands of a parent or another adult at home, 29 percent reported feeling insecure due to job loss among parents, 22 percent were insecure due to personal job loss, and 24 percent reported insecurity because of hunger. Due to the pandemic, 66 percent of students found it difficult to complete their schoolwork.

One of the victims of drug abuse during the pandemic was 16-year-old high school ice hockey player Sequoyah Klingele. After school tournaments were canceled due to COVID-19, Sequoyah began to struggle due to a lack of structure, his father told Reuters.

By January 2021, Sequoyah was searching Google for keywords like “symptoms of depression” and “do I have a mental illness?” In April, his friend found him dead. Sequoyah had overdosed on the drug methadone.

An earlier CDC report from June last year had discovered that visits to emergency rooms among youths from suicide attempts had spiked during the pandemic. Between February and March 2021, such visits rose by 50.6 percent among girls aged 12–17 and 3.7 percent among boys when compared to the same period in 2019.

Even before the pandemic, mental health issues among youth were a concern. Nationwide, 26.1 percent of high school students reported feeling persistent sadness or hopelessness in 2009, a number that jumped to 36.8 percent in 2019, and then to 44.2 percent in the current survey.

Speaking to Newsday about the most recent CDC survey report, Audre Midura, supervisor of Nassau BOCES’ Mental Health Consortium, highlighted the need to help students develop critical skills to help them cope with challenges arising from the pandemic.

“The key to us moving forward out of this is to keep promoting social-emotional learning as a necessary skill,” she said. “People need mental health and physical health. It’s just as important.”