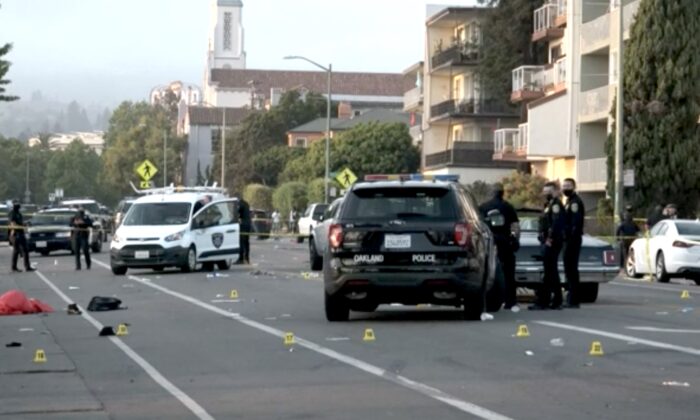 Police officers at the scene of a shooting in Oakland, Calif., on June 19, 2021. (AIO Filmz/Screenshot via NTD)
Regional News

At least one person died and several were wounded during a shooting near a Juneteenth Festival in Oakland, California, on Saturday, police said.

Oakland Police Department officers were already in the vicinity of the shooting—reported after 6 p.m. local time—as they were providing resources in the area after a crowd of about 1,000 people gathered in the Lake Merritt neighborhood, said the department in a news release.

In all, six people were hit by gunfire during the shooting. A 22-year-old male was pronounced dead after being taken to a nearby hospital, according to the release.

Four male victims between the age of 16 and 27 were injured, and a 21-year-old woman was hurt in the incident, said police.

Two suspects were arrested after officers witnessed them running away from the scene of the shooting, the news release said. Two guns were recovered, officials added.

Oakland Mayor Libby Schaaf and other officials said that people were in the vicinity celebrating, while local media reported that the shooting occurred near the scheduled Juneteenth celebration. It’s not immediately clear if there was a connection between the shooting and the recently declared federal holiday.

“Tonight a joyous occasion at our Lake Merritt was marred by a senseless act of gun violence,” she said in a statement. “Police in the area tended to victims, and apprehended two people with firearms near the scene. The investigation is ongoing and will determine if they are connected to the shooting. Our thoughts are with the family and friends of the victims, and I want to thank our officers for a quick response.”

Andrew Simpson, a witness, told the Mercury News that he “saw a guy with a gun pointing at a car. Everyone started sprinting and screaming,” adding: “They were yelling ‘we’re getting shot at!’ I didn’t really understand what was going on. Hundreds of people were running. People were jumping in their cars and driving off.”

According to local media reports, the shooting death was the 59th homicide recorded in Oakland in 2021. Around the same time last year, there were only 32 reported homicides being investigated.